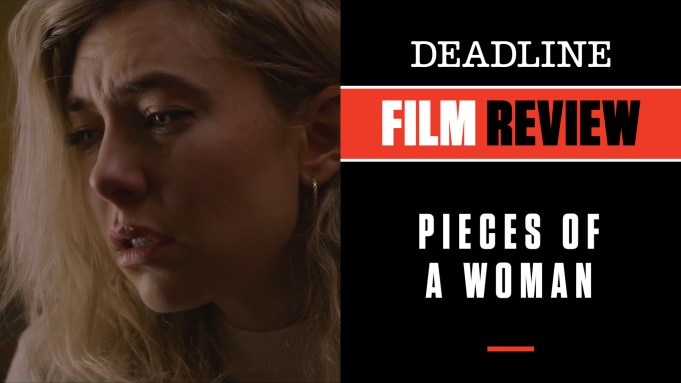 Vanessa Kirby won the SIlver Lion Best Actress prize at the 2020 Venice Film Festival for her searing and intensely raw performance as a woman whose life is torn apart after losing her baby in director Kornel Mundruczó’s gut-wrenching drama Pieces of a Woman. It begins streaming today on Netflix.

This is a tough, not easy to warm to but ultimately memorable film that will reward you if you can get by the first 30 minutes, in which a tragic childbirth sequence is played out in vivid and unapologetic style as Martha (Kirby) goes into labor in the apartment shared with father-to-be Sean (Shia LaBeouf), a home delivery aided by Eva (Molly Parker) who is a replacement midwife Sean calls in a panic to help bring the baby into the world. What seems to be normal though soon turns highly dramatic when things go unbearably wrong and the newborn cannot be saved, medical help arriving too late. At this point the opening title credit appears, yes 30 minutes into the film, a device Mundruczó uses clearly to signal the turn in the story away from this risky but fascinating opening where the audience is barely given a chance to breathe.

From this point on the next 90 minutes tell the aftermath over the course of a year in which Martha tries to balance unspeakable grief while attempting to come back to some sort of normalcy. It’s not an easy task as we see conflict with Sean, who does not turn out to be too helpful in helping her emotional journey, and trouble as well with an overbearing mother, Elizabeth (Ellen Burstyn), who has definite ideas of how her daughter should be living her life — and that does not include with Sean, who is having an affair with the lawyer (Sarah Snook) handling the high-profile case against the midwife, now heading to court as Eva is publicly being blamed for what happened.

This is the most conventional section of the film, but Kirby navigates all the twists of this first English-language picture for the Hungarian director, one written by his wife Kata Weber and inspired by a real-life baby loss for the pair. That, however, is where the connection between later events in Weber’s script and to their own lives ends.  I was with it all the way, but I have to put a warning out there that this will not be easy viewing for some (I could also say that as well for another of the director’s films, the Cannes Film Festival Un Certain Regard winner White God, which I found to be absolutely extraordinary). Working in a language not native to him, Mundruczó succeeds well steering his impressive cast in the Boston-set film to nuanced performances for the most part.

Kirby is just remarkable, a role for which she will long be remembered and a portrayal she goes all in on. LaBeouf’s character doesn’t have the same arc but he’s good in it, particularly in that harrowing first act. However, aside from Kirby, it is Burstyn who really makes your heart beat a little faster with a steely but determined manner and a killer monologue that should handily put her in the Best Supporting Actress Oscar race. This is her finest work in a while. Snook, Ben Safdie and Iliza Schlesinger make the most of much briefer screen time.

Check out my video review above with scenes from the film. Do you plan to see Pieces of a Woman? Let us know what you think.