Continue to Deadline SKIP AD
You will be redirected back to your article in seconds
Skip to main content
February 2, 2021 4:00pm 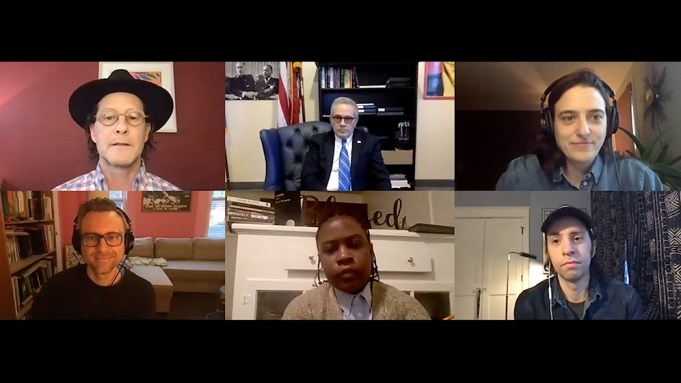 Former public defender Larry Krasner was elected district attorney of Philadelphia in 2017 with a mandate to shake things up. Big time.

“The whole system was broken. We were trying to fix all of it,” he told Deadline. “I had been in court four to five days a week for 30 years and what I was watching was a slow motion car crash.”

Krasner’s insurgent campaign to become Philadelphia’s chief law enforcement officer, and the obstacles he has faced trying to implement progressive reforms, are the focus of the episodic documentary series Philly D.A., premiering at the Sundance Film Festival.

“When we first heard that he was running we in no way thought that he was going to win,” producer Ted Passon admitted during an appearance in Deadline’s virtual Sundance Studio. He created the series along with Yoni Brook and Nicole Salazar. “At first the idea was to follow what we thought would maybe amount to a political stunt and then it became, ‘Okay, this is really gonna happen.’ So the real story would be, ‘What’s going to happen when you get in there? Are you going to be able to do these things? Should you do these things? What’s the next step?’”

The series, which will premiere on PBS sometime in the spring, shows Krasner butting heads with the Philadelphia police union and even with some of his own assistant D.A.s, who apparently don’t have an issue with mass incarceration, cash bail that disadvantages poor people, or any number of systemic issues.

“I came in thinking maybe you get elected and you can just flip a switch and things can be different the next day,” recalled Salazar, who on Saturday won the 2021 Sundance Institute/Amazon Studios Producers Award for Nonfiction Filmmaking. “Larry leads an office that has 600 employees, 300 attorneys…Some of these attorneys, now with different leadership in place, have to grapple with what it means to change the way they do their jobs and even, within that change, how they see themselves.”

“We wanted to…look at the criminal justice system from a lens that you really wouldn’t have been able to do before unless you had access inside the prosecutor’s office,” Brook noted. “It actually is really fascinating and dramatic when you have the ability to talk to the people who are making those policies from various perspectives.”

Krasner said he has no regrets about allowing cameras to observe his office at work.

“I don’t think it’s actually been that difficult for us,” the D.A. commented. “It is reality. But it’s not a reality show. I guess in a reality show maybe I’d be…showing my private persona but it really is people talking spontaneously about things they believe and problems that they are having. It is a real-time storytelling method that they’ve employed here.”

The series focuses on more than just Krasner and his staff. It also documents police officers, a city council member and community activists, like LaTonya Myers.

“With Larry’s election I [saw] that a lot of formerly incarcerated people like myself came out and voted for change,” she said. “I hope our city continues to put a scope under our elected officials and people that have our freedom at their will.”

Philly D.A. debuts at Sundance tonight, at 6 PM PT. Watch the full conversation in the video above.