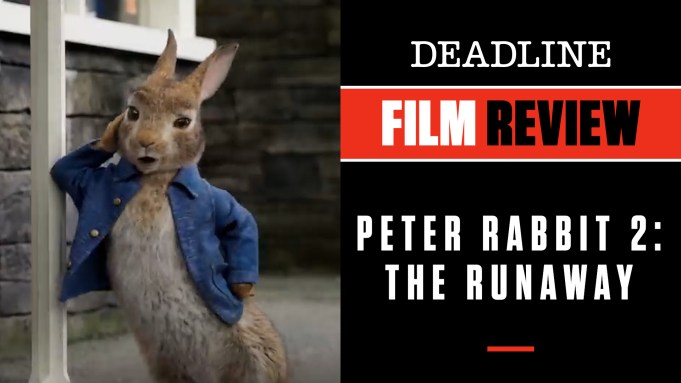 Family movies seem to be the golden ticket to getting people back into the habit of going to theaters as they reopen slowly. If that continues to be the case, Sony,  2.0 Entertainment, and MRC’s Covid-delayed sequel to the 2018 franchise starter, Peter Rabbit, should hit the bull’s-eye as this follow-up not only delivers on what was so appealing about the first live-action/animation hybrid edition but actually expands it out of the McGregor garden and into the big city with winning results. Peter Rabbit 2: The Runaway opens this week in Australia, where it was shot, before hitting North American audiences on July 2 just in time for a summer season that hopefully will put theaters back on track.

For this new film, based on the immortal animal and human characters of the 100 year old Beatrix Potter classic children’s books, Thomas McGregor (Domhnall Gleeson) and Bea (Rose Byrne) are newly married, and some level of a peaceful truce has been put in place in the garden where an all-out war between Peter Rabbit (voiced by James Corden) and gang has ensued with Thomas. Now the mischievous bunny seemingly is taking more responsibility and mending his ways — fine with Thomas, as long as he stays away from his prized tomatoes. With this ceasefire in place, where does returning director-writer Will Gluck (who co-writes with Patrick Burleigh) take the sequel? To the big city, of course.

Bea’s charming drawings and book of Peter and his cohorts Flopsy (Margot Robbie), Mopsy (Elizabeth Debicki) and Cottontail (Aimee Horne) is taking off, and it means a trip into Gloucester to meet with her publisher, Nigel Basil-Jones (David Oyelowo), who sees great commercial prospects in a series of books based on the rabbits. Peter, however, thinking he is the star attraction, is devastated to see Jones label him as “the bad seed” of the bunch (which also includes returning characters Mrs. Tiggy-Winkle, Pigling Bland, Tommy Brock, the roosters and moral center Benjamin Bunny, the latter voiced by Colin Moody). So is that the way the world sees him, as a bad boy? Maybe, then, that’s what he is meant to be.

Peter sets off on his own in the big, imposing city, and there he is approached by the devious older rabbit Barnabus (Lennie James), who spots him from the book’s notoriety and recruits him for his ragtag gang that also includes Tom Kitten (Damon Herriman), Mittens (Hayley Atwell) and fat rat Samuel Whiskers (Rupert Degas). This is where the plot takes a complete Oliver twist, as it were, as Barnabus is a bit of a con resembling Dickens’ infamous Fagin, who enlisted streetwise souls to do his thievery. That is the plan hatched by Barnabus, who plots a major heist of dried fruit from vendors at the local street fair. Peter becomes part of that scheme and enlists his friends from the garden to come and join them in the big steal.

Gluck has all the proper slapstick elements back in place here but resists the out-and-out frenetic warfare that marked the key set piece of the first film. Here he has developed these characters with more dimension and real heart, even as Peter can’t seem to be anything but a magnet for trouble. Animation from Animal Logic is superb. In Corden’s capable hands, though, we really feel for the poor fella who can’t seem to help himself stay out of the danger zone. Taking the story out of the garden and into the city is inspired, and this irresistible cast of characters, including the new additions, make the sequel a real treat for kids and actually not a chore for adults to sit through it with them — hopefully in a movie theater.

Check out my video review with scenes from the movie at the link above. Do you plan to see Peter Rabbit 2: The Runaway? Let us know what you think.