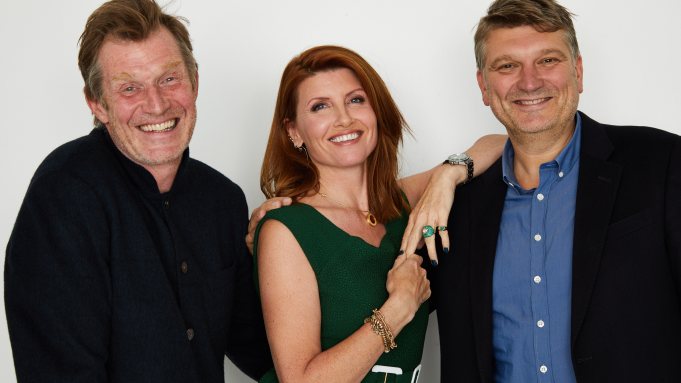 Inspired by a true story, Pete Cattaneo’s Military Wives explores life on an army base for a group of women who find a unique way to cope with their partners’ deployment to Afghanistan: they form a choir.

Kate (Kristin Scott Thomas) and Lisa (Sharon Horgan) band together to create a rather unlikely singing club—one that in real life inspired the charity Military Wives and a whole host of similar choirs around the world.

“I didn’t know anything about military wives; I didn’t know anything about choirs,” Cattaneo said at Deadline’s TIFF studio. “You see hundreds of war films, but you’ve never seen what happens to the families left behind. As a family person myself, it felt like interesting territory, and then when I knew it was a true story and it had choirs in it, I thought, Well, if you put music and singing in the middle of all that, that just sounds like potential to be a great movie.”

For Horgan, in researching the life of a military wife, it helped to see the real-life women as approachable. “They’re just all regular people,” she said. “They’re absolutely the same as you and me, and it’s such a massive thing to wrap your head around.”

Jason Flemyng plays an officer overseeing life on the base. For him, getting into the part meant acknowledging the pressure the wives are under when their partners go to war. “It’s so unique, that idea of saying goodbye to someone,” he said. “You know, when people go to work, obviously they could have a car crash or something terrible could happen. But for those people to actually say goodbye to your husband or wife who’s going way, you know there’s a chance you’re never going to see them again. It’s so poignant, and for anyone who’s watching the film, you feel that feeling for them, and you imagine it in your situation.”