Continue to Deadline SKIP AD
You will be redirected back to your article in seconds
Skip to main content
September 10, 2020 10:00am
3Comments 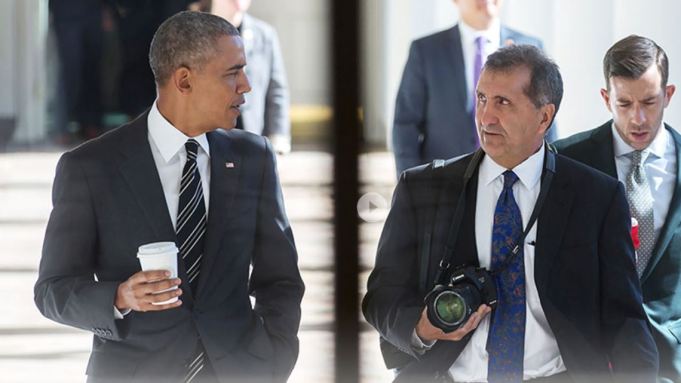 It is a shame that the Telluride Film Festival turned out to be just a press release of the movies that they would have shown had the Labor Day weekend fest not been canceled due to concerns over the coronavirus pandemic. Two movies, two urgent movies, had hoped to launch there and get the attention, as well as deserved buzz, not for Oscar season as is usually the case with these early fall fests but rather another election that, believe it or not, is even more important than the Academy Awards (I know, hard to imagine) — that is the one being held November 3.

I reviewed All In: The Fight for Democracy last week, and this film documenting Georgia gubernatorial candidate Stacey Abrams’ efforts to stop voter suppression is timely and eye-opening (it is now streaming on Amazon). If Abrams had the opportunity to be in Telluride, as would have happened in any normal year, she would have run right into Pete Souza, the fabled White House photographer during the terms of Ronald Reagan, and particularly Barack Obama. That is because an extraordinary, personal, revealing, important and highly emotional documentary about him and his work, The Way I See It (Focus Features/MSNBC Films) was also set to have its world premiere last weekend at Telluride. Instead, those honors for The Way I See It now go to the mostly virtual Toronto Film Festival, which officially opens tonight, and where this documentary from director Dawn Porter and producers Laura Dern, Evan Hayes and Dern’s Jaywalker Pictures partner Jayme Lemons will finally have its world premiere Friday. It will then open in theaters September 18 followed by its MSNBC premiere on October 9 with just a little less than a month before the presidential election.

In a way, the experience of watching the movie was profoundly depressing, as you compare the presidency Souza captured during the Obama years, with the complete freedom to shoot over 2 million candid photos, to the one that exists in the White House now almost four years later where transparency is not exactly the order of the day. No matter what side of the political fence you are on — the section on Souza’s work with Reagan is also heartening to see — the institution of the U.S. Presidency is shown intact, and with great dignity. What makes this especially fascinating is to see how Souza, basically the man behind the camera and never in any other capacity, became an Internet star and a person who became publicly politicized over the past three and a half years as he watched what he believed was the irreparable damage Donald Trump was doing to the institution and the country, a belief borne of his own unique position as eyewitness to two legendary presidents.

The film represents the first feature film under the MSNBC Films banner, which seems to be following the example of CNN in jumping into the theatrical documentary business. The partnership with Focus makes perfect sense when you consider both are part of the same Comcast family. That the film will get a much wider viewing ahead of Election Day via its exposure on MSNBC is evidenced by the pressure — and civic duty — the filmmakers and Souza himself felt about getting this out there and finished in time to make a difference — or at least that is what they hope as they ironically have to turn to Canada tomorrow to launch it on its journey into the hearts and minds of America.

The COVID-19 crisis meant they had to get creative in order to finish the film in time to hit the fall festivals and self-imposed release and broadcast goals. Some of the interviews had to be done via Zoom and post-production was also a challenge, especially considering Porter was still working on another (lauded) docu, John Lewis: Good Trouble, during the same period.

For Porter, Dern , and Souza with whom I conducted a joint phone interview this week it was worth the crunch time to get it out there. For Porter it felt like she was on a mission.

“I felt like I had been holding my breath for a few years, and it was just…was getting numb,” the director said. “I missed a leader that I respected, I missed having that model for my children, and the one thing that Pete said at the very beginning, ‘I want this to come out before the election,’ and we just all kind of looked at each other and felt the power of this. We’re like, this is not going to be a movie that we peg to a festival or anything like that. This was really about getting out a message, amplifying even more than Pete being a number one New York Times bestseller and double print, but it was just putting everything together, and Samantha Power says this in the movie and I completely agree with her, this is a 911. It’s impossible to watch this and not see how much we’ve lost, and that is really the hope for it, and Pete’s photos do that for us.”

For the newly minted Oscar winner Dern, this was also a unique career highlight just to be involved. “The origin story of this is Pete. Not only his extraordinary archiving of not only our history, the people’s history, America’s history, but the history of leadership, the history of empathy in leadership, the history of nobility in the White House regardless of politics, and how the Oval Office attempts to serve through a respect for the very office that is being asked to represent the people with. His work was so extraordinary and it meant so much to us, as has his voice in comparatively what he saw to what we’re seeing now,” she said. “So I am so grateful to both Jayme Lemons and Evan Hayes in their falling so in love with Pete’s presentations as they saw them, and we were also in love with his work and what it meant to us, and then being able to find someone as extraordinary as Dawn to help frame this narrative, not only of Pete’s journey but of the journey of all of us to understand what leadership means to us, and yes, at the moment that we consider our privilege to vote, our demand that it matters, our protection of it from any suppression, and reminding each other of what we’ve had in leadership before and what we require for ourselves as Americans. I mean, I think that’s the longing and why I’m grateful to be a participant in reminding people through the gift of Pete’s work. What we have to think about as a people but also when we’re voting this November.”

For Souza, who has spent the last few years doing something he is less accustomed to be doing — appearing in front of cameras at events for his in-person appearances, and on TV shows — it didn’t take a whole lot of convincing to become a willing participant in this. “It’s a little daunting to be the subject of a film. It wasn’t something that I was looking to do. I had sort of established my own mechanism of speaking out, but when someone comes to you with the credentials of Evan, and Jayme/Laura I listened. I listened to what they had to say and I thought that it was worth me participating in it and to give up a little of my anonymity to further my message in a different medium than what I was using my voice on social media, so I guess I’ll leave it at that,” he said, adding that he did not have any editorial control but was able to make some key suggestions in selecting the right pictures for the right moments in the film. He has a very good memory of what would work from a vast catalog of some 2 million photos. He had used several in his own presentations that he did in front of 500-1000 people at a time.

Souza also talked about how the film is uncannily relevant right up to this moment with controversy over Trump’s treatment and views of the military , as The Way I See It has a section documenting President Obama’s interactions with soldiers including a particularly poignant relationship he developed with a wounded man named Cory Remsburg (watch the clip of that scene in the video above).

“What Pete’s pictures point to are kind of the universal qualities that we need in a leader. Empathy, compassion, intelligence, a hard-work ethic, and so that’s what the pictures show, and everything that this current President is doing most of the things that he does are not in support of those values,” said Porter, who mentioned it was daunting to choose just the right photos, as well as videos of both Obama and Reagan that really showed the contrasts between then and now.

Souza said he only told Obama just a month ago that he was participating in a film about himself and that the former president has not yet seen it. The key reason he says that he did contact him was a very personal one. Obama not only convinced him to propose to his longtime (and I mean longtime) girlfriend, but also that they could then get married in the Rose Garden and he would officiate. There are photos of it in the film. “I wanted to make sure that he was OK with me showing some of the wedding photos, so I just wanted to make sure he was OK with that because those pictures have never been published before,” Souza said, laughing.

Dern said she is moved by what the film says about empathy and honesty and how Souza’s photos tell that story. “It’s just so powerful, and how Dawn and Pete together give us that journey. The journey of what you have done for this country through photography, not only all that it will evoke in us as we watch it,” she said.

It may be a cliché, but in a heated election season in which a lot of lies are being hurled, here is a film that lends truth to the time-honored phrase “one picture is worth a thousand words.”

Check out an exclusive clip from The Way I See It at the top of the post.