Continue to Deadline SKIP AD
You will be redirected back to your article in seconds
Skip to main content
February 26, 2020 2:45pm
3Comments 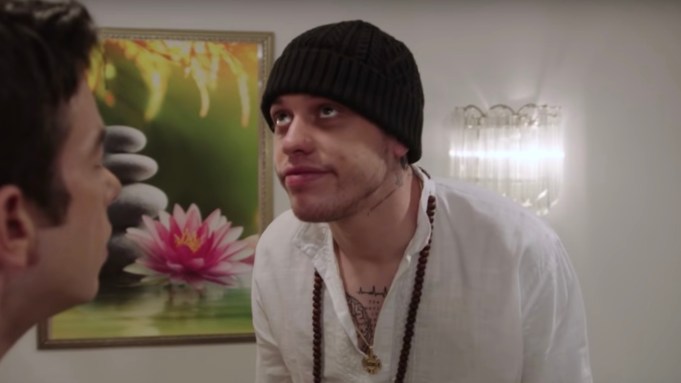 Saturday Night Live‘s Pete Davidson, who earlier this week said he’d just about had it with all the show’s jokes at his expense, pokes some fun at himself in SNL‘s new promo with this week’s host John Mulaney.

“What’s going on here, Pete? Show me your eyes,” Mulaney says, stumbling on Davidson working on his “inner chakras” with a guru.

“I’m meditating, I’m getting sleep, I had a dream for the first time last week,” says Davidson, who has made no secret of his longtime pot use. “Things are great.”

When Davidson puts on a jacket that the former SNL writer Malaney thinks looks like “hood rat gear,” Davidson cracks, “You gotta give the people what they want.”

Then comes a kicker that’s worth sticking around for.

The musical guest this weekend is David Byrne and his American Utopia musicians. The concert show closed Feb. 16 but will be back on Broadway in September for a 17-week run.

Check out the new SNL promo above.