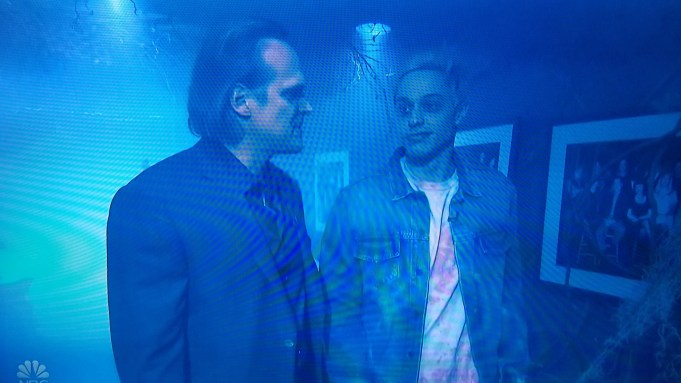 “Yeah dude, it’s lit, right?” were nearly the first words Pete Davidson has said all season so far on Saturday Night Live and the late-night landscape went from Upside Down to alright tonight.

Showing up in host David Harbour’s Stranger Things themed monologue for the third SNL of the show’s 45th season, the absence of Davidson from the first two weeks was explained as if he was trapped in the alternative dimension from the 1980s-set Netflix series created by the Duffer Brothers. “Why don’t you come back with me, you could do the show tonight,” Harbour, who plays Hawkins, Indiana Sheriff Jim Hooper on Stranger Things, asks a rather nonplussed Davidson before the host scurried off under a barrage of questions about his character’s fate and future – as you can see in the SNL video above.

The real reason Davidson wasn’t on SNL last week or for the September 28 season opener is that he’s been filming Warner Bros’ James Gunn directed Suicide Squad 2 in Atlanta.

Namechecked with a crash and a laugh last week on SNL, Davidson also showed up on the show’s Weekend Update tonight to call out co-anchor Colin Jost for the ribbing.

“And by the way, Colin, I don’t know if you’ve seen Joker, but you should start being way nicer to me,” Davidson added in the second reference to the Warner Bros megahit this weekend on SNL – the first reference was of course in the fake trailer Grouch video short, which you can watch here.

The Angry Birds Movie 2 actor also joined Jost to talk about reports that dating apps have cause a rise in STDs and why he didn’t think that was news – just take a look at the video below and you’ll see for yourself:

BTW, the very first words that Pete Davison said on the SNL this season tonight were “hey, what’d up?” That’s what he replied to David Harbour’s exclamation of his name upon seeing him in the 30 Rockefeller Plaza version of the Upside Down