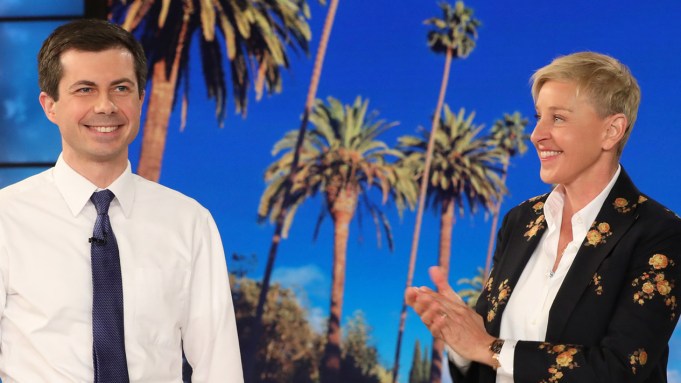 Ellen DeGeneres tried her best to get South Bend Mayor Pete Buttigieg to officially announce his White House bid on her show Friday.

Mayor Pete has rocketed to No. 3 in polling among the 20-something Dem White House hopefuls. He’s now running behind only best-known candidates Joe Biden, who also is not yet announced, and Bernie Sanders. So it’s easy to forget Mayor Pete hasn’t yet made it official.

Just a few weeks earlier, people did not know how to pronounce his last name, he noted in the interview taped for Friday broadcast. “The good news for me is elections are multiple choice,” he joked.

“Would you like to announce here?” DeGeneres said, declining to be distracted.

Demonstrating his diplomacy, the two-term mayor said he can think of no better place than her daytime talk show “except my hometown.” Watch a clip above.

When the interview was taped, his campaign already had revealed plans for a “special announcement” in South Bend, on Sunday. He’s reported already raising $7M in the first quarter, beating such announced candidates as Sens. Elizabeth Warren, Amy Klobuchar and Cory Booker.

As in his video announcing Sunday’s event, Mayor Pete told DeGeneres that this election is about winning an era and coming up with policies that will make as much sense in 2054 – “when I’ll get to the age of the current president” – as it does today.

DeGeneres wanted her viewers to know Mayor Pete is a Harvard grad, a Rhodes scholar, a concert pianist, served in the military and speaks seven languages, including French, Spanish, Italian and Arabic.

But mostly, she enthused, “you’re very calm” — in marked contrast to President Donald Trump, who is “very angry.”

Buttigieg acknowledged that it’s challenging for the Dem Party, which has to “say something” when Trump lies. “But it can’t be all about him. He has this ability to make it all about him, even when he’s being criticized.”

Democrats, he said, have got to focus on having conversations about the American people, not Trump.

He also responded to Veep Mike Pence’s claim that Buttigieg had criticized his Christian faith.

“I’m not interested in feuding with the vice president,” the alomst-candidate said. “If he wanted to clear this up, he could come out today and say he’s changed his mind and it shouldn’t be legal to discriminate against anyone in this country for who they are. That’s all.