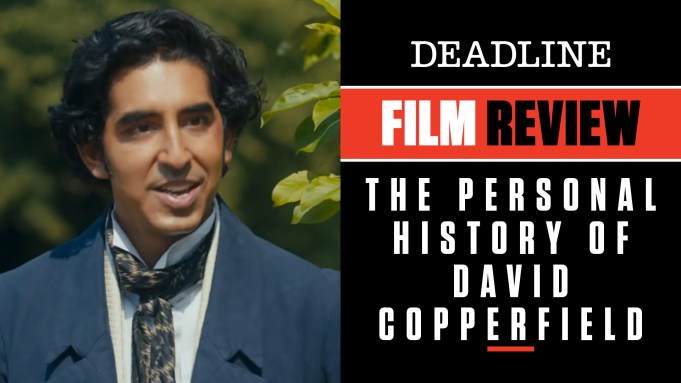 With a filmography that includes satirical high points such as Veep, In the Loop, The Death of Stalin and The Thick of It, you might not have guessed that a Charles Dickens adaptation would be front and center for writer-director Armando Iannucci, but The Personal History of David Copperfield is an inspired choice. Actually, it shouldn’t be too surprising since the director tipped his interest in this area with his 2012 Armando’s Tale of Charles Dickens.

There hasn’t been a feature film on Copperfield in over half a century, and considering the book ran 624 pages, many have found it better suited to longform TV versions than a two-hour movie. But Iannucci and his co-writer Simon Blackwell have found the humor — in fact, some out-and-out hilarity, in the story of the aspiring writer who narrates his own autobiography from birth to maturity, traversing a series of life’s adventures from rags to riches to rags to, well, success at what he sets out to do. The filmmakers find freshness, relevance, even messages for our times about identity and how you present yourself, among other things. As with all things Dickens, the book was chock-full of colorful characters, too many in fact, and this version highlights several in ways both faithful and, more important, innovative.

You have to give a shout-out to casting director Sarah Crowe taking marching orders from her director and putting together perhaps the most effective colorblind castings of a major motion picture I have seen in a very long time. What they have on film resembles the world as we know it now, but just as significant, in its own way, the world as Dickens wrote it. With a cast that includes Black, Asian, South Asian, white and more, these actors all got the job due to talent, and there is no compromising the text to explain their presence. They are playing the roles of characters that have been around 170 years, since the book first appeared in 1850, and they play them very well.

Of course, it all revolves around Copperfield himself, and Dev Patel turns out to be the ideal choice. He is charming and completely believable in the role of a guy whose life is up and down but someone who, even as a child, was observing and writing about it all the time. The film is bookended with Copperfield reading his story onstage to a rapt audience, but it is what comes between that is so engaging. Primarily that is all due to his encounters with this very specific world of Victorian England.

From his days growing up in a unique beach house to being shuffled off to a bottling job that is like a darker version of what Dickens put Oliver Twist through to his school days, job as a proctor, various encounters with the ladies and so much more, this is Dickens with perhaps the lightest touch onscreen in years. If you know the book, you know the people, but they are brought to vivid life by a large group of pros including, most delightfully, Tilda Swinton as Aunt Betsey and Hugh Laurie as Mr. Dick, her loony cousin who clearly has voices in his head. I also loved Peter Capaldi’s Wilkins Micawber, the perpetually broke and struggling man who takes David in while he works at that forlorn factory. Ben Whishaw is quite amusing as the infamous Uriah Heep, but not as purely evil as he has been in the book, a little more of a conniving sycophant here. Benedict Wong is excellent as Mr. Wickfield, as is Rosalind Eleazar as daughter Agnes, someone who sets off sparks for David. There’s nice work all around including Aneurin Barnard as Steerforth, Daisy May Cooper as Peggotty, Gwendoline Christie as the feared Jane Murdstone, and special shout-out to Morfydd Clark in two roles as Clara Copperfield and later as the fetching Dora Spenlow.

The film is sumptuously mounted in terms of production design, cinematography, costumes and a great orchestral score from Christopher Willis. This is solid witty and wonderful entertainment, even if you can’t fathom Charles Dickens. In this case, as it turned out, all it needs is the Iannucci touch. Producers are Kevin Loader and Iannucci. Fox Searchlight releases it Friday, nearly a year past its world premiere on opening night of the 2019 Toronto International Film Festival. Check out my video review with scenes from the film at the link above.

Do you plan to see The Personal History of David Copperfield? Let us know what you think.