Continue to Deadline SKIP AD
You will be redirected back to your article in seconds
Skip to main content
June 16, 2021 1:54pm 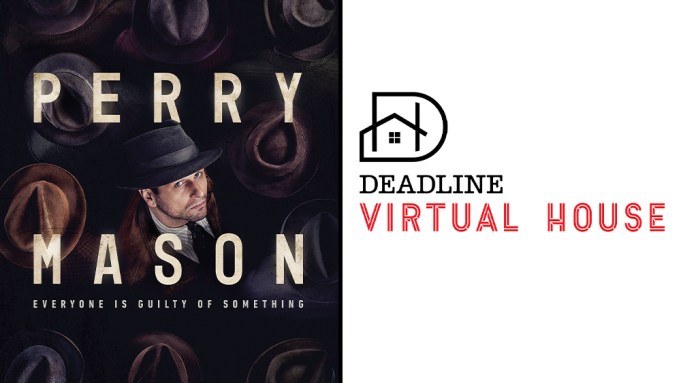 There can be no question that Perry Mason with Raymond Burr was one of the true iconic weekly TV series in the 1950s and ’60s as it featured infamous courtroom case after courtroom case. The new HBO series of the same title is definitely not your father’s Perry Mason, but rather a dark, Depression-era origin story that follows the title character from his beginnings as a PI and eventually into the courtroom. With Matthew Rhys taking on the role, he has made it his own, and superb casting and production values have brought Mason back to a brand new place in the television firmament.

Joining me Tuesday night to dissect how it all came about, and maybe where it is all heading, were the stars, creatives and craftspeople who made it all possible. In a three-panel session for Deadline’s Virtual House screening series I welcomed creators/EPs/writers Rolin Jones and Ron Fitzgerald, director/EP Tim Van Patten, and costume designer Emma Potter for panel one on “The Vision.” Then Van Patten returns with EP Susan Downey, editor Mako Kamitsuna, composer Terence Blanchard and VFX supervisor Justin Ball for panel two on “The Execution.” Finally, Perry Mason himself Rhys joins fellow castmates John Lithgow, Chris Chalk and Juliet Rylance for panel 3 on the acting challenges of bringing it all to life.

As to why now? “Maybe it was time, right?,” Jones explained of the need for the origin story. “There was enough break in between the last iteration and this one, and many generations and many people having babies and other people who had no idea what it was, and I think, for me and Ron, a sense of discovery because we had seen it, you know, on our old reruns and forgot that there were all these delightful paperback novels that sort of preceded it, and I don’t think those had had a new printing in a while, and they were there to be sort of mined and rediscovered. A little bit of pulp greatness, forgotten, buried on some library and old used bookstore shelves, and you know, time to brush it off and see what was in there I think.”

Fitzgerald added to that. “I mean, Erle Stanley Gardner created the whole thing. So, that’s always there. You always have the goal posts, you know, that he set up for you there, and the challenge for us became how did this guy become who he is, because there are no clues. In 80 novels, you know a lot about the lawyer, but nothing about the man. So, our goal was to…let’s find out who this guy is. What makes him tick? Let’s make some choices here and see how he becomes this intrepid lawyer, you know?”

In terms of assembling the stellar cast, Van Patten, a veteran of numerous successful HBO projects (The Wire, The Sopranos, Boardwalk Empire, Game of Thrones) was effusive. “As good as I’ve ever worked with, if not better, honestly. I mean, not a lemon in the bunch. Like, it was such a privilege every day to just be on the floor, sit at the monitor. It was like a front-row seat. Every day, every scene was a joy. I mean, you know, look, it has its challenges, but honestly, it’s one of the best jobs I’ve ever had in this regard. You know, just every actor, and everyone got along so well. It was just great,” he said.

Rhys, coming off his Emmy-winning role in The Americans, jumped at the chance to play a part that would bring out his inner Bogart and Raymond Chandler.

“Absolutely. You know, that was a big box tick for me for several reasons,’ he said. “I wanted to become an actor. I got to live out these Chandleresque experiences and pretend to be Bogart. There were times where sometimes the boys would throw in these little idioms of the time, and it was hard not to…but I found myself impersonating Bogart … I was weary of that, but yes, I got to play, you know, my Spencer Tracy moments out in live action with old cars and flicked cigarettes and adjust my fedora as I walk away. I certainly got to live out a number of early boyhood fantasies for me.”

He said that at first he wasn’t sure he wanted to take on such a well-known character.

“You can’t remake Perry Mason, but it was later qualified that they were going to reimagine Perry Mason, which I was very glad to hear, and when I met with Ron and Rolin and how they pitched the entire backstory, it made the origin story, to me, very interesting,” Rhys said. “And yes, I think there’s certainly a generation who have a very firm idea of who Perry Mason is and always should be, I’ve been told, consequently there’s whole generations who have never experienced Perry Mason and didn’t even know who Perry Mason was. So, that was advantageous to us, But yeah, there was a little trepidation, absolutely, because it was such a, you know, enormous hit.”

For six-time Emmy winner and Oscar-nominated Lithgow, it was a double challenge because his character E.B. Jonathan (and his storyline, which lasts for the first four episodes) was completely original.

“It was just the very creative writing going on between Ron and Rolin just making up this wonderful story, which was not an Erle Stanley Gardner story at all. In fact, it’s a much more contemporary story,” Lithgow said. “They’ve injected a fascinating series of conflicts between a very brilliant, but very damaged, Perry Mason and a not-so-brilliant and self-important loser in E.B. Jonathan, though the audience doesn’t know what a loser he is at the start. All those things are just literally really fascinating choices that they made, which went way beyond Erle Stanley Gardner because, in so many ways, we talk about reimagining Perry Mason. They’re taking this. even though they’re placing it back in the ‘30s, they’re giving it a very modern sensibility, and among other things, they’re just putting in character conflict that people didn’t tend to mess around with back in those days. So, it’s a wonderful combination of old and new, and I just got to play this brand new character like I was in a totally new piece of material.”

Check out our Virtual House deep dive into all things Perry Mason by clicking on the video to see portions of the interviews. Season 1 of Perry Mason can currently be seen in its entirety on HBO Max.