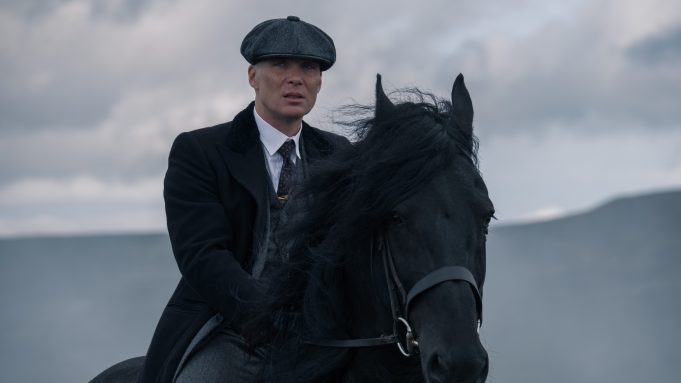 “There is God, and there are the Peaky Blinders,” says Cillian Murphy’s Tommy Shelby in the first trailer for Season 5 of the period saga. BBC One has just dropped the one-minute glimpse (check it out above) which kicks off with a voice over from Tommy, the Birmingham-bred gangster-turned-Member of Parliament who, in a nod to the Season 4 opener, posits, “We own the ropes. Who’s gonna hang us now, eh?” But sister Ada (Sophie Rundle) later tells him, “No one is gonna hang you, Tommy. You’re gonna hang yourself.”

It’s safe to say this season of the Steven Knight-created and written drama will delve into Tommy’s psyche. Producer Caryn Mandabach said at last week’s premiere of the first episode of Season 5, “Tommy is more in line with Don Draper or Walter White or Tony Soprano.” Knight has said he would like to “rehabilitate” Tommy.

Helen McCrory and Paul Anderson also star in Peaky, turning up in the trailer amid guns, flames, horses, musings and music (the video is set to “Strange Weather” by Anna Calvi who composed the score this year). McCrory said at the London premiere the family is “all searching for love,” but the question becomes, “Can a bad person become good? If a bad person does a good act, does the good act become bad?… Even gun-wielding eye-slitters need love.”

As we’ve previously reported, Season 5 kicks off with the financial crash of 1929. Opportunity and misfortune are everywhere and when Tommy is approached by a charismatic politician (Sam Claflin), with a bold vision for Britain, he realizes that his response will affect not just his family’s future but that of the entire nation. The trailer also includes a look at Claflin in full firebrand-mode as Oswald Mosley.

The timely storyline of Season 5 is “fortunate for us and unfortunate for the world,” Knight said last week. “The things that were happening in the time we are setting the series have an unbelievable relevance to what’s going on now: the rise of populism, fascism, racism. What I hope the experience one might take from this is what was the consequence of what happened the last time. Nine years later, there was a world war.”

The 2018 BAFTA winner for Best TV Drama, Peaky returns later this year, moving to BBC One from BBC Two (the airdate is still to be confirmed, but we will update once it’s offical; the series streams Stateside and in many markets on Netflix which typically makes it available at the close of the UK TV broadcast run).