UK PM Boris Johnson To Step Down Amid Resignations & Scandals: Timetable For Successor, Analysis Of What It Means For British TV & More
Read the full story
May 13, 2021 9:00am 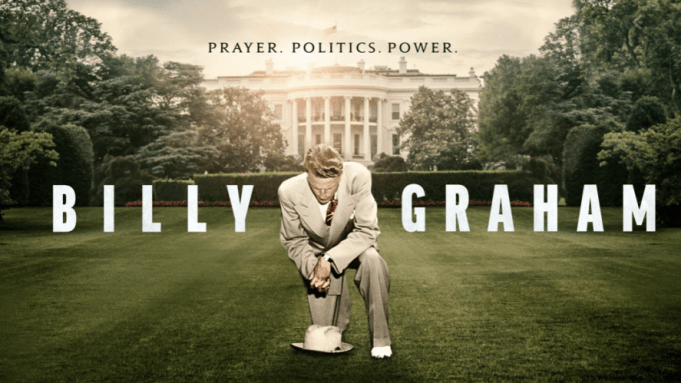 EXCLUSIVE: How did the son of a dairy farmer in North Carolina rise to become “America’s Pastor” and one of the most influential Christian leaders of the 20th century? The answer to that question is explored in the documentary Billy Graham, part of the PBS series American Experience. The film directed by Sarah Colt premieres Monday, May 17 on PBS stations.

The documentary reveals how Graham developed his communication skills as a door-to-door Fuller Brush salesman during the Great Depression. In 1934 he went through a conversion experience while attending a revival meeting, signing a “decision card” that night that declared, “Being convinced that I am a sinner, and believing that Christ died for me, I now receive Him as my personal Saviour.”

Over the ensuing decades Graham would preach in person to millions of people around the world, and to reach tens of millions more through radio and television.

The honey-haired, blue-eyed preacher galvanized the faithful with a stirring message of spiritual renewal, against the backdrop in the 1940s and 50s of the advance of Communism around the globe.

“Communism is a religion,” Graham asserts at one point in the documentary. “Who is greater, Marx or Christ?”

Graham’s embrace of capitalism, warm relationship with civic and business leaders and growing sway with a large body of fundamentalist Christians made him an attractive ally for political leaders. He became a supporter and spiritual counselor to President Eisenhower, and later became close with President Nixon. The Watergate scandal not only ended Nixon’s presidency, but diminished Graham’s moral stature that he had cultivated over the course of a generation.

“The closer he moved Christianity to politics, the more he opened up the opportunity for Christianity being used to polarize, to politicize,” historian Uta Balbier observes in the documentary. “He opened Pandora’s box the second he stepped into the Oval Office for the very first time.”

In the exclusive clip above, Graham’s charisma and powers of persuasion are on full display even in the relatively early days of television.

Billy Graham is directed by Colt, produced by Helen Dobrowski and executive produced by Cameo George of American Experience.

George noted, “Billy Graham profoundly changed our nation and, through his extraordinary powers of communication, rose to the highest heights of international fame as well. Before Billy Graham, it was not commonplace for presidents of the United States to hold prayer breakfasts and publicly meet with religious leaders. That’s all a direct result of Graham’s mission and strategy. He became a catalyst for the whole evangelical movement.”