Continue to Deadline SKIP AD
You will be redirected back to your article in seconds
Skip to main content
May 15, 2019 11:41am
2Comments 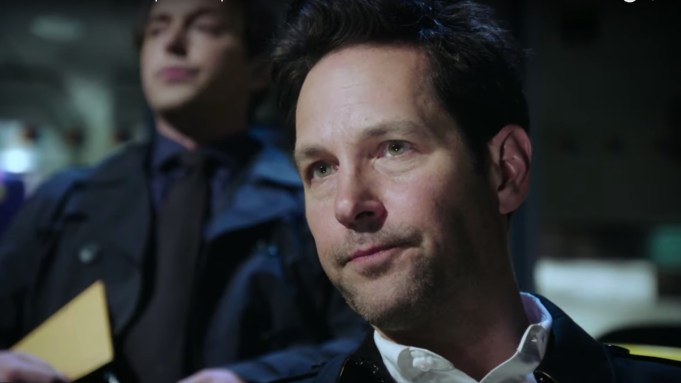 Saturday Night Live‘s final promo of the season has arrived, should you choose to accept it. The Mission: Impossible-style set-up has guest host Paul Rudd doing that smug-meets-sheepish thing that no one does better, a nice tease for this week’s season finale.

The promo has Rudd sitting in an empty Studio 8H when cast member Beck Bennett takes a seat behind him. After giving the secret password – capital P, lowercase assword – Rudd fumbles for the envelope containing the should-you-choose-to-accept-it mission, written in crayon.

The bit’s payoff comes with Heidi Gardner – who just might be this season’s MVP – trying to have a quiet lunch “privately.” Stick around to see Rudd try to save face after a beautifully executed smackdown.

This week’s episode marks Rudd’s fourth time as host (he’s on the big screen as Ant-Man in Avengers: Endgame). DJ Khaled will make his SNL debut as the week’s musical guest, his 11th record, Father of Asahd, set for a May 17 release.

And if you’re wondering what Rudd’s reading at the beginning of the promo, it’s a New York Times from the future. The WWIII-sized headline of the Nov. 9, 2020, edition reads “City Board Approves Plans For New Manhattan Skyscraper,” with a sub-head noting, “Working Class Speaks Again.” And the sub-sub-head: “Blue-Collar Whites Give Stinging Rebuke To Democratic Party Again.” Or maybe some other type of rebuke – the “Stinging” is blurry, and it might be the Democratic Party’s “Agenda” that’s getting rebuked (see a screen grab below). Either way, that must be some skyscraper.