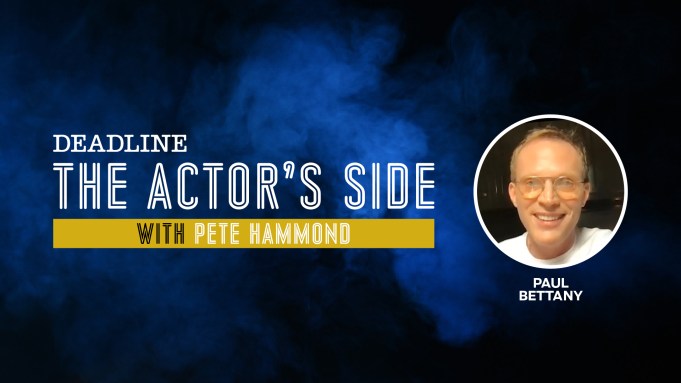 The Emmys have been very good to Paul Bettany so far this year. Not only is he nominated for Outstanding Lead Actor In a Limited Series or Television Movie for WandaVision, the Marvel limited series on Disney+ scored a whopping 23 nominations. Meanwhile, his film Uncle Frank was picked up by Amazon out of Sundance and has been nominated for Outstanding Television Movie. He is superb in both starring roles and clearly voters are noticing.

Bettany’s public profile has skyrocketed since taking on the MCU in Iron Man as Jarvis, and morphing as Vision into Captain America and the Avengers films, but after a couple of death scenes he didn’t expect there would be much more. Then along comes WandaVision and a new chapter begins. He joins me for today’s edition of my Deadline video series The Actor’s Side, where we talk about all this activity and he tells me how scary it really was re-creating scenes from some of TV’s greatest sitcoms (a key feature of WandaVision) beginning with the iconic Dick Van Dyke Show, where Bettany had to step whole-hog into the shoes and persona of Van Dyke’s Rob Petrie and make us believe he was just as great. No easy task — and they had to film those scenes in front of a live audience as well. It is all part of the ingenuity of this Marvel series, and it certainly gave Bettany a chance to show his comedy chops.

Bettany also talks about another dream role in an iconic franchise as he got to be part of the Star Wars saga in Solo. Of course, this star has plenty of other notable screen appearances including A Beautiful Mind and The Da Vinci Code for his Solo director Ron Howard, and one of his personal favorites, Master and Commander. Regarding the latter, I ask about word there is a prequel being planned featuring his character Stephen Maturin’s younger self. Could he be involved?

Check out our conversation and get Bettany’s “actor’s side” of things by clicking on the video above.

See a new episode of The Actor’s Side every Wednesday during Emmy season.