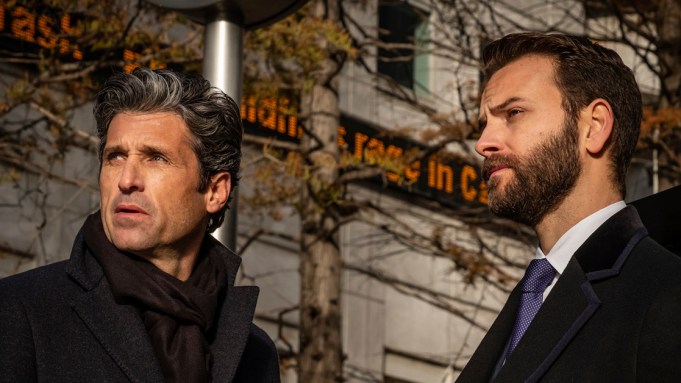 Sky has unveiled the first trailer for its Patrick Dempsey-fronted financial thriller Devils.

The broadcaster is launching the series, which comes out of its Italian division, in April.

Dempsey, who is to star in CBS pilot Ways and Means, plays bank CEO Dominic Morgan in the ten-part drama, who welcomes Massimo Ruggero, played by Suburra’s Alessandro Borghi, a ruthless head of trading to the world of finance. Set in the London office of a major U.S. bank, Ruggero ends up involved in an intercontinental financial war rocking Europe, and he has to choose whether to ally himself with his mentor or fight him. The series is based on the best-selling novel by Italian trader Guido Maria Brera, which was partly inspired by the financial crisis that swept global markets in 2008.

Dempsey told Deadline that he was interested in being involved in an international story. “It has a different perspective on the financial world to the one that we’re used to, usually from the American perspective,” he said. “I love being in Europe and you want to do something different, you want to challenge yourself. You go from the guy everybody loves to the guy you’re not sure about.”

“Everyone’s making their own projects from France to Italy, they’re no longer just waiting for the American market so I think it’s really important that we start collaborating internationally and use [our] visibility to cross pollinate. It’s an incredible time because there are so many stories to be told, depending on which country you’re from with young filmmakers and writers,” he added.

The series, which is produced by Lux Vide and Orange Studio, funded by Sky Studios and distributed internationally by NBCUniversal Global Distribution.