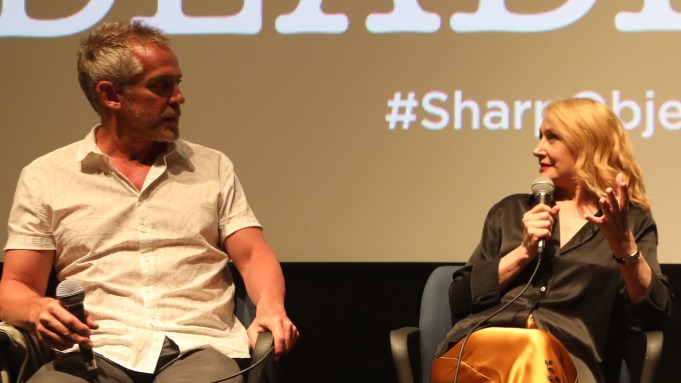 At Deadline’s Sharp Objects screening event on Sunday, Patricia Clarkson had the entire audience laughing loudly. The reason? Her impromptu impression of Vallée and his specific directing style, which eschews traditional marks, lighting and shot planning.

After her comedic bit though, Clarkson got serious about praising Vallée’s work on the HBO Limited Series centered around Amy Adams’ Camille Preaker—a traumatized journalist investigating unsolved crimes in her home town. “It was beautiful,” Clarkson said, “because it’s a way you rarely get to work as actors, and it’s very valuable. It really is all about the scene and the truth, and it’s not about marks. It’s nothing you can plan for. You have to have the words, and of course the emotional life in you. It’s free-floating, and it’s really quite exceptional to be on a set that way and not know where you’re going, if you’re going to swim or sink.”

In the series Clarkson is Adora, the complicated, conflicted and ultimately imprisoned mother of Camille. The role earned her an Emmy nomination, with nods for Adams and for the show, too.

Vallée for his part has fully embraced a skeleton crew set and a completely fluid process. “It’s kind of great once you try it,” he said. “You work with a DP who has the camera on his shoulder, and with available light. We’re not putting any cinema spots in the set, we ask the crew to get out. We’re not reflecting the light, we’re not blocking it. So the set is the set. Then we just use the space and we go and we sgtart shooting and we got for 30 and 40 minutes until the digital card is full.”

Originally, Vallée said he came to the project through Adams, whom he had met on a project that didn’t work out. “We were working on a Janis Joplin project, a feature film,” he said. “She called me and said, ‘Would you like to come and try this and play in this new sandbox of television?’ And that was going to be her first, and my first. That was before Big Little Lies. Only one script was written, and I read the book first, and then I read the script, and I was surprised she wanted to go into that dark place. I said, ‘If you want to do this, I want to do this. I want to be the first on set to witness this.'”

For more from Clarkson and Vallée, click on the video above.