Continue to Deadline SKIP AD
You will be redirected back to your article in seconds
Skip to main content
May 29, 2019 4:32pm
2Comments 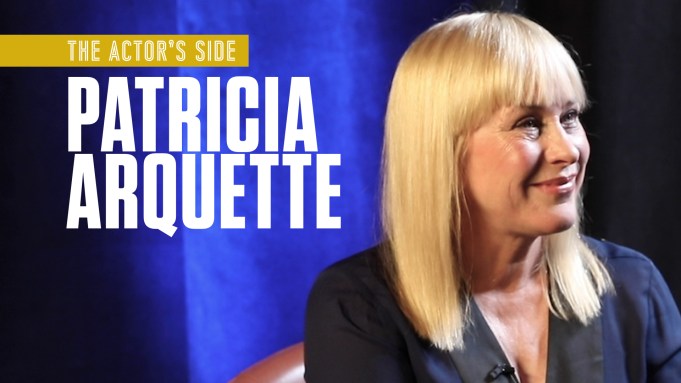 Patricia Arquette has been killing it, as they say, in the past few years with Oscar- and Emmy-winning performances that have made her one of the most in-demand character actresses around. I emphasize the phrase “character actress ” because — as she says in today’s interview for my Deadline video series, The Actor’s Side — she had a fear of getting older in this business. Instead she has discovered a whole new world of character work that wasn’t offered when she was younger and doing movies like True Romance and Lost Highway, edgy projects to be sure but not like the kind of roles she is getting now.

She won the Oscar and just about every other award for her extraordinary work over the course of a 12-year shoot in Richard Linklater’s Boyhood. Her Emmy came as the star of the drama series Medium, and this year there is huge Emmy buzz for not one but two major roles as real-life characters in limited series. She has already won a Golden Globe, SAG, and Critics’ Choice award as Tilly Mitchell, the prison employee who helped two convicts break out in Escape at Dannemora, directed by Ben Stiller (a former Arquette co-star), and now plays another true-life story as Dee Dee Blanchard, the extremely protective mother in Hulu’s The Act in which she stars opposite Joey King as Gypsy Rose Blanchard.

Both shows won her great acclaim and it’s possible that she could find herself in both the Lead Actress and Supporting Actress categories for these respective performances. She talks about the rise of so many networks providing new content as a reason for these now opportunities. She also discusses finding the human element in both characters, even though she has described them in some ways as “monster women.” Arquette tells how she had to put on 40 pounds, then lose it, while playing Tilly, and then they expected her to be even heavier as Dee Dee. She had a better solution for that and tells me all about it. To watch our conversation just click on the link above.

Past episodes of The Actor’s Side are available here.