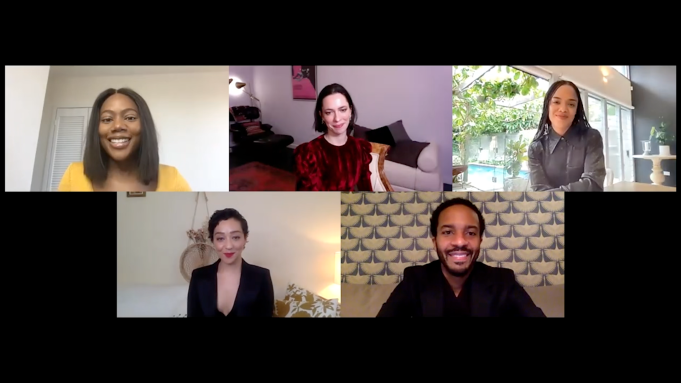 One of the most talked-about titles at this year’s Sundance Film Festival is Rebecca Hall’s feature directorial debut, Passing, an adaptation of Nella Larsen’s 1920s Harlem Renaissance novel.

Making its world premiere today in the Dramatic Competition section, Passing tells the story of two Black women, Irene Redfield and Clare Kendry, each of whom can ‘pass’ as white but choose to live on opposite sides of the color line in 1929 New York. When the two unexpectedly reunite, their renewed acquaintance ignites a mutual obsession that threatens both of their carefully constructed realities.

During her time at Deadline’s virtual Sundance Studio, Hall shared how her own upbringing and questions of race within her family inspired her to tackle this project. While a number of her family members were biracial, including her mother, “we didn’t use words like passing or biracial,” she said “because there was so much confusion around the issue.”

Hall added that while she “trying to work out my position in relation to it all,” someone gifted her with Larsen’s book. “It felt for me a moment of historical contextualizing of the choices that these people in my family made. I had words for it. I had an emotional understanding of it, and it affected me enormously and I didn’t entirely understand why.”

She continued, “I suppose the only way that I can come to terms with anything in my life has been through making art in some capacity. I wrote a screenplay then 14 years ago, didn’t think it was really for anyone but me. Then over the years, it became increasingly obvious that I had to make the film and I understood how I want it to make it.”

Hall was joined by the film’s stars Tessa Thompson, Ruth Negga, and André Holland. You can check out the full interview above.