Continue to Deadline SKIP AD
You will be redirected back to your article in seconds
Skip to main content
December 31, 2019 9:09am 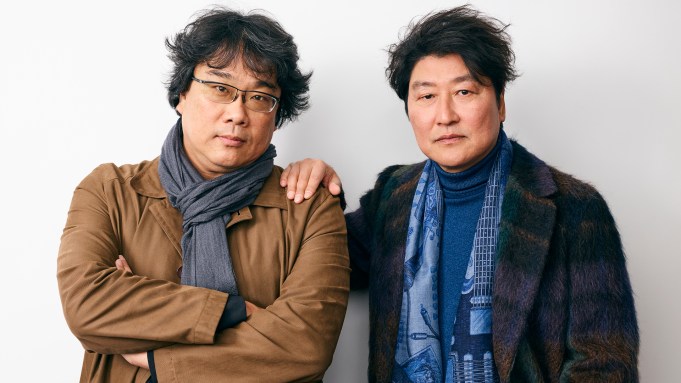 After debuting to mass international acclaim at the Cannes Film Festival in May, Bong Joon-Ho’s domestic thriller/black comedy Parasite more than managed to sustain its momentum. Since its North American release in October, the film has become the U.S.’ highest-grossing foreign-language Palme d’Or winner, and it is the hot favorite in the Oscars’ International Feature Film race, and may even cross over into some of the other categories too.

When Bong, along with his regular leading man Song Kang-Ho, dropped by the DGA Theater recently for Deadline’s The Contenders New York, the writer-director said his original plan for the film, which largely takes place in the home of a rich Korean family, was to make it a stage play.

“It is true that I first conceived of this idea for the theater,” he told the crowd of Academy and guild voters. “But from the very beginning, it didn’t work out that way. From the first line, I was already thinking of the camera position. I just realized that I had to do this as a film, as always.”

Part of the film’s appeal is that even critics have found it hard to categorize, with its mounting plot twists and its sudden shifts of tone and pace. “I never really defined the genre that I wanted the story to be in,” he explained, “or what metaphors or symbols I should place within the story. I just wanted to depict very interesting and entertaining situations. I move through impulses… I tend to not like symbols, [and] I wanted this film to feel more physical.”

Song, who previously made three films with the director including the 2013 cult sci-fi hit Snowpiercer, noted that things had been a little different this time round. “Director Bong always tells me about his projects a couple of years prior,” he recalled. “But this time when he handed me the script, he also handed me another piece of paper: it was an NDA that I had to sign. It said that if I leaked anything, they would sue me. So I had to sign it to receive the script.”

Bong was quick to point out that this was always going to be an empty threat. “We never sue each other [in Korea],” he laughed. “It never happens.”