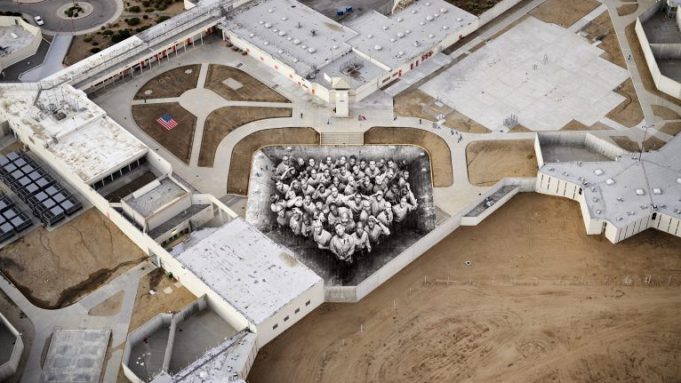 EXCLUSIVE: The French artist known as JR can do remarkable things with paper and glue—and a few other ingredients, like brilliant photographic talent and a capacity to reframe reality.

In his new documentary Paper & Glue, JR uses “unexpected canvases” to celebrate the humanity and individuality of a range of ordinary people, prisoners, immigrants and others who are often overlooked. Imagine a Christo, but instead of wrapping monuments in fabric, he transforms buildings, public staircases, the roofs of trains, a border wall, a prison yard, into settings for human portraits.

Many viewers got to know his work through the Oscar-nominated documentary Faces Places (Visages Villages), directed by JR and the late Agnès Varda. Paper & Glue holds its Los Angeles premiere at the Museum of Tolerance on Thursday, before opening the next day at the Laemmle Monica in Santa Monica. It began playing at the Angelika Film Center in New York last Friday.

MSNBC Films is distributing the documentary, winner of the audience award at the Philadelphia Film Festival, and two prizes at the Hamptons International Film Festival, including the Victor Rabinowitz and Joanne Grant Award for Social Justice. Ron Howard, Brian Grazer and MSNBC President Rashida Jones are among the film’s executive producers.

In the exclusive clip above, JR works on a unique installation at the Tehachapi supermax state prison in Southern California, an endeavor that allows inmates to see themselves in new ways, on a grand scale.