Continue to Deadline SKIP AD
You will be redirected back to your article in seconds
Skip to main content
January 25, 2021 4:53pm 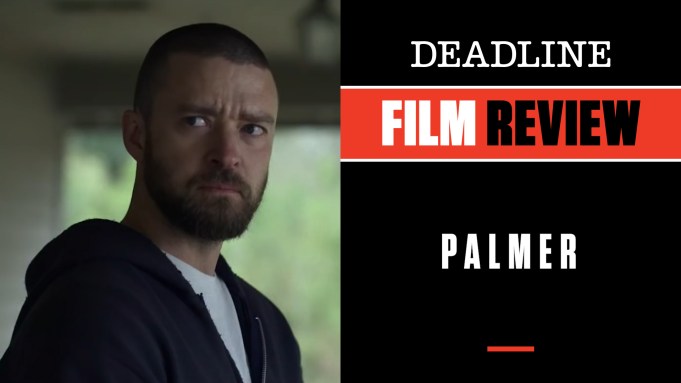 Justin Timberlake’s success as an entertainer and music superstar sometimes makes us forget he has shown considerable promise as an increasingly natural screen actor. In films from Alpha Dog to The Social Network and work with directors including Woody Allen and the Coen brothers, and even charming voice-over work in animated hits like the Trolls movies, he has continued to up his game outside of the arenas and recording studios. And his latest, a leading role as the title character in Palmer, is his best yet.

Timberlake is ex-con Eddie Palmer, a one-time hotshot football star in his hometown before trouble took over after just one year of college ball and his life took a wrong turn, landing him behind bars. Now looking to start over after getting out, Eddie returns to his small Louisiana hometown and the house of his grandmother, Vivian (June Squibb), where he meets 7-year-old firecracker Sam (Ryder Allen), a kid prone to playing with dolls, wearing barrettes in his hair and professing love for his favorite Disney princesses. “Aren’t you supposed to be a boy?” Palmer cracks upon getting to know Sam, a bullied kid who is the son of Shelly (Juno Temple), a neglectful mother who’s away from the trailer in Vivian’s backyard more than she is in it due to her own addictions and bad choices in men, including current boyfriend (Dean Winters in a thankless role). Thus Sam finds himself more drawn to warmhearted Vivian as he spends most of his time over there.

As the film moves along, the relationship between Eddie and Sam grows, with the former taking him under his wing, almost acting like a big brother or even father figure. Eddie also manages to get a job as the school janitor, and there meets Sam’s teacher, Miss Maggie (Alisha Wainwright), who agrees to help out in Sam’s care beyond the classroom, soon striking up her own relationship with Eddie as well. Of course, trouble will rear its head, particularly when Shelly is back, but the bulk of the movie centers on the unique bond between Eddie and Sam that will have you rooting for both to have a happy ending.

If this all sounds like familiar territory, sure it is, but screenwriter Cheryl Guerriero’s nicely unsentimentalized script (at one time on the prestigious Black List) saves the day along with Fisher Stevens’ authentic direction. Stevens, an actor also known for impressive behind-the-scenes work in documentaries including the Oscar-winning The Cove, keeps it all real with a nice Southern flavor thrown in. This is unassuming, character-driven material, small but meaningful and a perfect showcase for the acting talents of Timberlake, who fits the role like a glove. His chemistry opposite young Allen is all there on the screen, and the two play off each other naturally. I only wish the irresistible charms of Squibb were given more screen time as this 90-year-old star is always watchable. Temple gets a largely unlikable character to play but makes her believable in the film’s showiest turn.

Producers are Charlie Corwin, Sidney Kimmel, Charles B. Wessler, John Penotti and Daniel Nadler. Apple TV+ begins streaming it this Friday. Check out my video review with scenes from the film at the link above.

Do you plan to see Palmer? Let us know what you think.