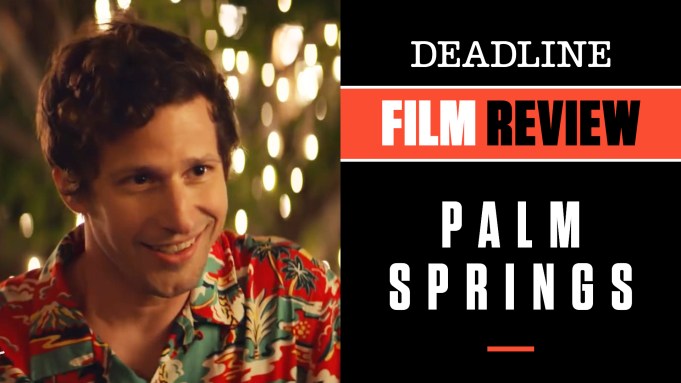 Palm Springs was the hit of Sundance in January, at least in terms of sales, when it rocketed up to a festival-record $17 million-plus deal with Hulu and Neon — actually, as Deadline reported, the real figure was probably closer to $22 million. That is pretty impressive for the feature directorial debut of AFI grad Max Barbakow, who cooked up the story with screenwriter Andy Siara.

On paper it sounds pretty derivative, yet another Groundhog Day imitator, plus a rom-com of sorts revolving around a wedding. Both of those well-traveled movie tropes are present, but wonder of wonders, miracle of miracles, Palm Springs possesses a fresh, funny, smart and very twisted spin on all of it — a loopy time-loop romp that never forgets first and foremost it is about recognizable human beings caught up in surreal circumstances. Plus, it represents the best screen outing to date for Andy Samberg, so good in short spurts on SNL and as the star of the sitcom Brooklyn Nine-Nine but uneven in features like the one-joke Popstar: Never Stop Never Stopping. He’s a talented dude and here really gets a nice showcase while still managing to play a three-dimensional human being.

The film opens in the desert city of its title with a massive earthquake, and soon we see Nyles (Samberg) lounging in a pool drinking beer, then attending a wedding as a plus-one for girlfriend Misty (a very funny Meredith Hagner), who invites him to join her. How is it that this guy seems to know everything that is going to happen at this wedding where he doesn’t really know anyone? An early sequence on the dance floor where he cleverly maneuvers his way in rhythm to the others is a clue that this all might be déjà vu for him. This sequence is really fun, and who knew Samberg was this nimble? Michelle Johnston was the choreographer guiding him niftily along.

I would have loved to see more, but after saving drunken bridesmaid Sarah (Cristin Milioti) from making a disastrous speech to her sister, the bride (Camila Mendes), crazy stuff happens and Nyles is suddenly back in his bed jolted awake. It goes like this over and over as he continues to relive the same day and same wedding, albeit with different crazy touches each time (dinosaurs, toothless bride, crashes, etc.). As it repeats itself,  Sarah is sucked into the same situation, desperately trying to figure out why she is forced to relive this wedding. She and Nyles are drawn closer by the very fact they are aware of what they wake up to, and that it isn’t your father’s Twilight Zone. A cave in the desert provides some clue to whoever enters it, but it is the realization that these lives are literally in the same cycle they can’t undo, unless they undo it themselves, eh?

Palm Springs isn’t preachy but has some pretty profound things to say about the way we live our lives, if you choose to read all that into it. Mostly it is fun watching these characters comfortable in their own wildly out-of-control rut, helpless to stop living the same day but also not afraid of it. Barbakow pulls off some inexpensive special effects that are charmingly dumb, but it is the humans floating in this realm that make it all work as splendidly as it does, starting with Samberg who excels in making Nyles likeably nutty and endearing in his own way. Milioti is a hoot and builds her frustration in funny doses. Loved to see old pros like Dale Dickey, June Squibb and Peter Gallagher pop in and out, and then there is J.K. Simmons as another wedding guest, Roy, who adds just the right amount of sauce to steal every scene he is in.

In the end, what seemed like a very familiar concept turns into the most original comedy of 2020. Producers are Dylan Sellers, Chris Parker, Akiva Schaffer, Becky Sloviter, Jorma Taccone and Samberg. Hulu starts streaming it on Friday, and it will play whatever theaters and drive-ins Neon can find.

Check out my video review above with scenes from the film. Do you plan to see Palm Springs? Let us know what you think.