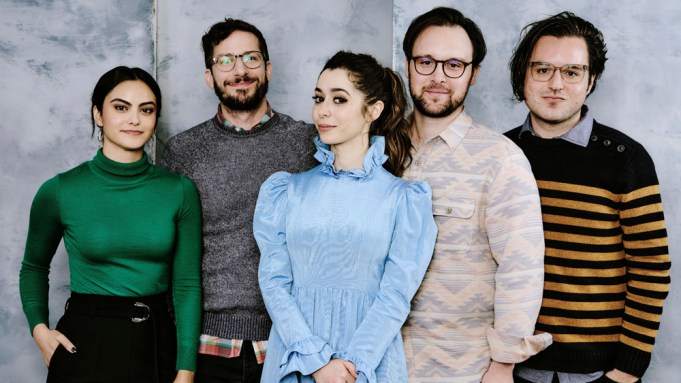 In the Sundance film Palm Springs, Andy Samberg plays the carefree Nyles, who meets Cristin Milioti’s Sarah, a reluctant maid of honor who is in Palm Springs for a wedding. Trapped at this venue, they begin to go on a journey of getting to know each other and themselves. According to screenwriter Andy Siara, it was kind of based on the experience that director Max Barbakow had at his wedding.

“All those thoughts that go into making those major life decisions, commitment and all that stuff — it’s kind of just all injected into this movie,” said Siara. “It’s just wrestling with those decisions that I think we all can relate to on some level.”

Siara and Barbakow were joined by Palm Springs stars Samberg, Milioti and Camila Mendes who all connect with it in their own way — but it’s not your typical romantic comedy.

“It’s a love story,” said Mendes. “But also there are much bigger like existential life questions and certainly when I read it, I was like, ‘Oh, this applies to everything’ — and I think that’s also what makes it so special.”

“There’s definitely a running theme of loneliness and being okay with that,” said Samberg. “And also the idea of taking the leap into committing to something and being with another person for the long term.”

“I feel like we really subverted [the rom-com],” Milioti said. “It is a comedy and yes there is romance, but there’s also like a lot of other things in it.”