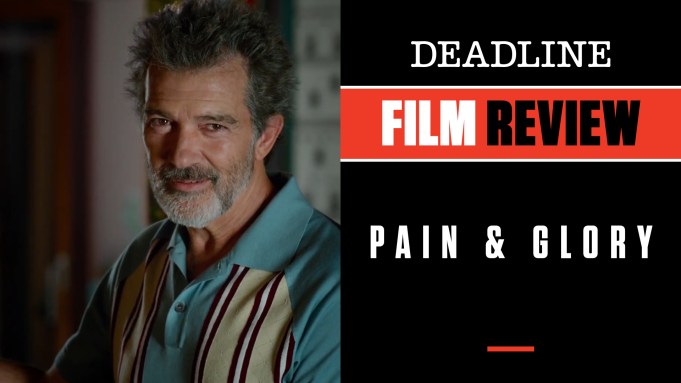 One of the highlights of this year’s Cannes Film Festival was the international unveiling of the great Spanish auteur Pedro Almodóvar’s 21st film, Pain and Glory (Dolor y gloria), which is his most personal yet — a look at a film director and his memories that represents the closest thing to Almodóvar’s own 8 1/2.

That 1963 masterpiece was Federico Fellini’s exploration of his own career behind the camera with frequent muse Marcello Mastroianni channeling him, however fictional the story was. In the case of Pain and Glory, Almodóvar turns to his own frequent star, Antonio Banderas (Matador, The Skin I Live In and Tie Me Up, Tie Me Down) to fill in the blanks as a director named Salvador Mallo, now struggling with his health and looking back on a life and career full of ups and downs.

The film gets off the ground as Mallo is reconnecting decades after his greatest triumph, a film that starred Alberto Crespo (Asiel Etxeandia), whom he has never stopped blaming for turning in a lesser performance than he wanted due to the actor’s heroin habit. Or so he believes. An onstage Q&A at a special revival of the film brings the two together, as well as in a scene where the actor, still on heroin, offers some of the drug to his one-time director, who at this point in his life decides to try it himself.

Almodóvar uses Mallo’s memories as a key component as the film goes on from there, flashing back to the 9-year-old Salvador (Asier Flores) and his relationship with his mother (a wonderful Penelope Cruz), as he begins to sense his own budding relationship to the arts and even emerging sexuality — the latter in a scene where he glimpses the young handyman (Cesar Vincente) hosing himself off after a long day’s work. Another key encounter in the somewhat episodic structure involves a reunion years later with an old lover (Leonardo Sbaraglia) that turns into the film’s most tender and moving scene. It’s beautifully acted by Banderas and Sbaraglia, full of aching silences and what once was.

So how autobiographical is this? Almodóvar definitely is digging up crucial moments he probably can relate to, and he has done it in bits and pieces in other films before. But this seems to be the most fully formed from his own life — though clearly he isn’t Mallo, a director who hasn’t had a major achievement in decades. Almodóvar remains one of our most prolific auteurs, someone who isn’t resting on his laurels and dwelling on what came before, but nevertheless a pound of his flesh is all over this movie right down to a title that says what it is all about: pain and glory.

How lucky he is to have Banderas at this film’s center as a man juggling health problems and revisiting his past in poignant, bittersweet moments. The star who won the Best Actor prize in Cannes for this has never been better or more assured onscreen, and you have to chalk that up to the longtime collaboration he has had with Almodóvar since the beginning of both their careers. It also is nice to see Cruz, another muse of the director’s, used so luminously in her supporting role.

The film also is steeped in movie lore and images, something irresistible to an aficionado like Almodóvar. Thus we have sweetly nostalgic glimpses of a young Warren Beatty and Natalie Wood in Splendor in the Grass and Marilyn Monroe circa 1953 on the big screen, among others. Almodóvar is a film fan first and foremost, and it always shows in one way or another. In Pain and Glory, this multi-Oscar-winning filmmaker goes deeper into the past of Mallo to put meaning into a present, where his artistry and well-being are at risk but hopefully renewed with movies still at the heart of who he is.

Producers are Augustin Almodóvar, Ricardo Marco Bude and Ignacio Salazar Simpson. Frequent colleague Albert Iglesias contributes his most lyrical musical score yet. Sony Pictures Classics puts the film into limited release on Friday. It is Spain’s official entry into this year’s Best International Film Oscar race. Check out my video review above with scenes from the film.

Do you plan to see Pain and Glory? Let us know what you think.