Continue to Deadline SKIP AD
You will be redirected back to your article in seconds
Skip to main content
December 3, 2021 11:48am 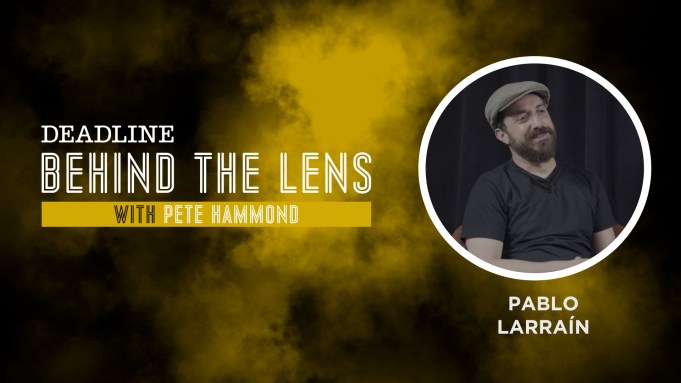 Pablo Larraín joins me on the premiere of our new Oscar-season edition of my Deadline video series Behind the Lens as we explore and dissect the ever-growing fascinating film career of this Chilean-born international auteur. His latest movie, Spencer, has been drawing Oscar buzz ever since its debut earlier in the fall at the Venice Film Festival.

Among the topics we discuss are the interesting turns in Larraín’s unique filmography, particularly in terms of genre. His first few movies focused on men, usually very strong men, in films like 2006’s Fugo, Tony Manero, Neruda and his Oscar-nominated No. As he explains to me, somewhere along the way he became just as intrigued by a variety of women, notably very public women that we see in new ways, like his English-language film debut Jackie, which earned a Best Actress Academy Award nomination for star Natalie Portman as Jaqueline Kennedy Onassis and now Spencer, a self-described fable about a very real tragedy that chronicles a key Christmas season weekend in the life of Princess Diana. Kristen Stewart in the title role for which she has been widely praised.

Spencer is a portrait of Diana, real but mostly imagined, that no one has put on screen before, and probably only Larraín would even think of (of course along with screenwriter Steven Knight). But memorable women are also at the center of many other recent films he has either directed or produced (or both) including the Oscar-winning Fantastic Woman, Ema and both the original Chilean version of Gloria Bell and its English-language remake that starred Julianne Moore.

We also talk about Larraín’s venture into American television with the eight-episode Apple TV+ series based on Stephen King’s Lisey’s Story which also features Moore. However it is Spencer that is at the heart of this trip behind the lens with Larraín, one of the most adventurous filmmakers working today.

Click the video above to watch the conversation, and check in every Friday during Oscar season for a new edition of Behind the Lens.