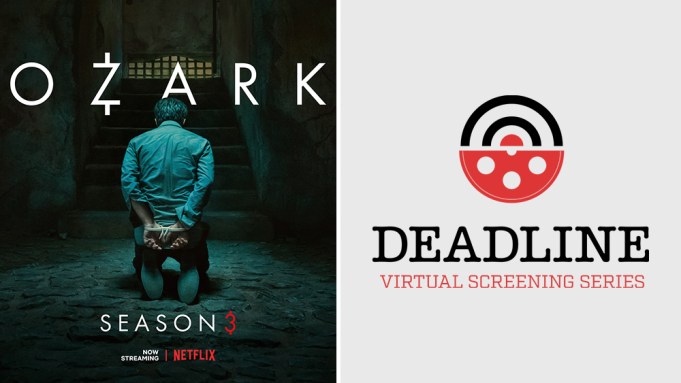 Deadline hosted a lively panel to celebrate the Emmy nomination haul for the third season for the always surprising Netflix series Ozark. Taking part were Jason Bateman — Emmy winning director, EP and star as the money launderer Marty Byrde; Laura Linney — who plays his ever ambitious wife Wendy Byrde; Julia Garner — the Emmy winner who plays Ruth Langmore; showrunner, writer and EP Chris Mundy; and casting director Alexa Fogel all took part. Alik Sakharov, who directed the final four episodes leading to arguably a shocking season-ender for the ages, could not find his way into the Zoom call but contributed quotes later.

The slow peel of characters played by Bateman, Linney and Julia Garner — each of whom is nominated — took their characters to unexpected and often painful places as each is forced to face who they really are and what lengths they will go to get what they want. Key to this was the introduction of Wendy’s bipolar brother Ben — a standout turn for Tom Pelphrey — and the growing ambition of steely mob lawyer Helen Pierce (Janet McTeer). Suddenly, Wendy faced an impossible choice regarding her unstable brother and her cartel masters, the results of which fractured the Byrde clan’s relationship to Ruth, who fell in love with Tom and unwisely got him sprung from the mental hospital Wendy stashed him in for his own protection. And Wendy found herself pitted against Helen for control of the loyalty between the Byrde’s money laundering casino and the cartel, an outcome played out in the last moments of the finale. All this has set a world of possibilities for the fourth and final season, which will be played out in two seven episode segments, with a start date a bit up in the air because of the complexity of shooting in this COVID-19 era.

You can hear how the show’s brain trust feels here about the accomplishment of the terrific season, but director Sakharov said one of his joys was watching the growing ambition of Wendy, who scared even her husband Marty with her ruthlessness. “Wendy Byrde has definitely emerged as a force not to take likely,” he said. “She is smart, determined, resolute. And she certainly shows her ‘teeth’ when pushed or cornered.”

As for that shocking ending, Sakharov said it was shot in a single take. “I wanted for it to have a slightly imperfect, unpremeditated natural flow,” he said. “If that natural flow was to be violated by the unexpected gun shot I thought the effect would be much more surprising, dumbfounding.”