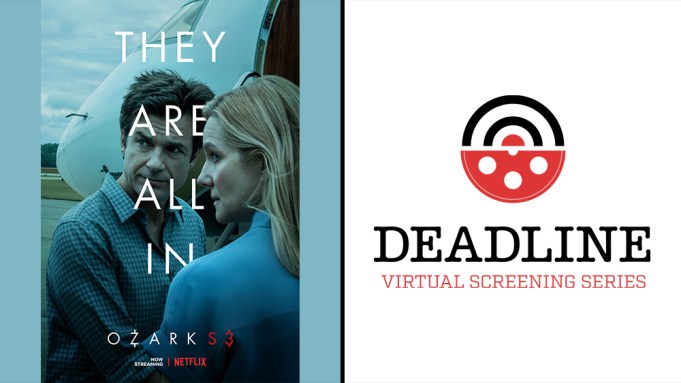 Deadline hosted a screening followed by a lively panel for the Netflix series Ozark and the most shocking episode in three seasons full of them. That would be the Season 3 finale, “All In,” which features one of the wildest season-ending climaxes we’ve seen in a long time.

Taking part in the Deadline Virtual Screening Series was Jason Bateman, the Emmy-winning director, EP and star as the money launderer Marty Byrde; Laura Linney, his ever ambitious wife Wendy Byrde, who in this episode sells her soul to prove her allegiance to a drug cartel; Julia Garner, the Emmy winner who plays Ruth Langmore, the backbone of the crooked money-laundering casino run by the Byrdes but who is driven to leave when the couple doesn’t stand up for her; Janet McTeer, the cartel lawyer Helen Pierce who has turned her steely ambition toward supplanting the Byrde family; and Tom Pelphrey, who wraps a standout season as Wendy’s brother Ben Davis, who is bipolar and makes the lethal decision to not take his medication, and whose unraveling sets the drama between all those other characters.

Also recapping the episode is Chris Mundy, the showrunner and executive producer who architected the grand collision in this finale, and set up what will be a cataclysmic final season that will be served up in two seven-episode installments because of the pandemic.

The slow peel of characters played by Bateman, Linney, Garner and McTeer took their characters to unexpected and often painful places as each is forced to face who they really are and what lengths they will go to get what they want. Key to this was the introduction of Ben, who is the only real truth teller in the narrative — even though that trait can make for a short life and put everyone else on the extinction list. Wendy had always tried to protect Ben and kept him far away from the fray, but suddenly faced an impossible choice regarding her unstable brother and her cartel masters, the results of which fractured the Byrde clan’s relationship to Ruth, who fell in love with Tom and unwisely got him sprung from the mental hospital Wendy stashed him in for his own protection. And Wendy found herself pitted against Helen for control of the loyalty between the Byrde’s money-laundering casino and the cartel, an outcome played out in the last moments of the finale.