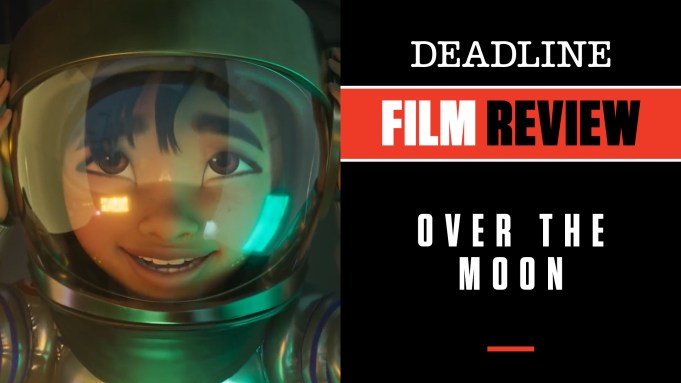 Glen Keane is a Disney animation legend whose work on such classics as The Little Mermaid and Beauty and the Beast has been widely praised, as was his Oscar-winning animated short Dear Basketball which he directed, as well as produced, with the late Kobe Bryant. It is no wonder I was expecting big things from his latest, Over the Moon, an animated musical for Netflix that represents his feature directorial debut and one that certainly has its heart in the right place if unfortunately not reaching for the moon in terms of pure artistry.

His co-director here, John Kahrs, is an Oscar winner himself for the sublime short Paperman, so the bar is set high for success. With a well-chosen voice cast and a poignant backstory involving the late screenwriter Audrey Wells, who left this final work as a message to her own daughter about dealing with grief and going on with life after the loss of a loved one, you really want to root for this.

It starts out promisingly detailing the life of young Fei Fei (Cathy Ang), her father (John Cho) and mother (Ruthie Ann Miles), the latter often telling her daughter to story of Chang’e (Phillipa Soo), who it is said drank an elixir giving her immortality that sent her to lord over a whole community on the moon. When her mother sadly dies, Fei Fei clings to that favorite story as a connection to her spirit. Four years pass and her father is clearly now interested Mrs. Zhong (Sandra Oh), but Fei Fei is dead set against his remarrying or doing anything to take away from the memory of their family. Resisting all this, she concocts an elaborate homemade rocket ship, and with Zhong’s goofy son Chin (Robert G. Chiu) in tow she heads off to the moon in order to validate the story  her mother told her and confirm the promise of immortality.

Lo and behold she meets Chang’e and discovers a technicolored world up there with rabbits, giant frogs, dancing chickens and so much more as she embarks on her quest to retrieve a must-have item, engages in chases and mayhem, and endures the constant wiseacreing of Gobi (Ken Jeong), the dog-like funny creature helping her out with Chin. It is this section that sinks the scenario into pure kiddie territory and will likely be more of an endurance test for the older family members.

The musical aspects don’t help a whole lot as the song score is just basically Disney-lite, a derivative batch of tunes so generically mousehouse you can’t tell one from the other. They come from the team of Christopher Curtis, Marjorie Duffield and Helen Park, but they might as well have been rejects from the songbook of Alan Menken. The moon sequence goes on way too long, embracing a Wizard of Oz -like sensibility but nowhere close to that classic 1939 film that so magically took us “over the rainbow,” if not over the lofty heights of the moon that is on tap here.

OK, if it seems like I am not exactly “over the moon” myself, I admit I am not the audience. This is for the youngest kids in the clan, and its sweet and valuable message of how to deal with and overcome grief is an important one, so let’s give it props for that — even if it gets a bit too frenetic for its own good in the middle. Once back on Earth, it regains its feet for a satisfying ending. The diversity of the casting and the setting is also a big plus, and you can never go wrong with Ken Jeong.  Producers are Gennie Rim and Peilin Chou. Netflix begins streaming it Friday.

Check out my video review above with scenes from the film. Do you plan to see Over the Moon? Let us know what you think.