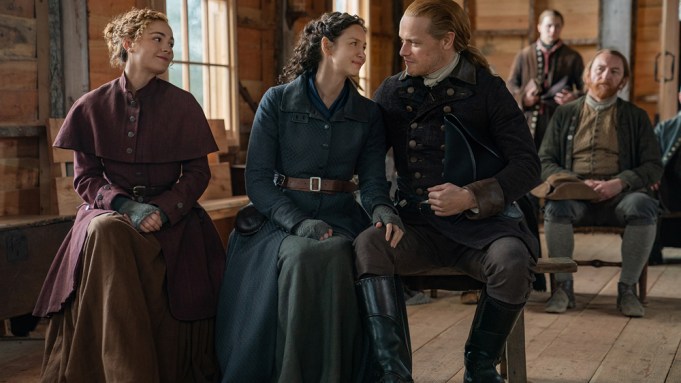 “It’s starting,” declares Caitriona Balfe’s Claire Fraser as the Revolutionary War sparks in the New World and old oppressors have new foes in the upcoming sixth season of Outlander.

“It’s almost here,” the woman who has crossed the ages and the oceans adds in a touch of hype for the early 2022 debut of the Sam Heughan co-starrer based on Diana Gabaldon’s best sellers.

While no specific premiere date was revealed, the Season 6 teaser and some new key art were dropped during the hybrid Outlander panel this morning at New York Comic Con. NYCC vets Heughan, Gabaldon, plus EP Maril Davis were in person at the Javits Center. Balfe, Sophie Skelton, Lauren Lyle, César Domboy, and John Bell participated virtually from various spots on the other side of the Atlantic.

In point of fact, Balfe is joining her Belfast director Kenneth Branagh and co-stars Jamie Dorman, Jude Hill and Ciaran Hinds live on stage at the Deadline Contenders London event today in the UK.

Back to Outlander, the pandemic delayed and now completed sixth season will consist of an eight-episode season including a 90-minute premiere episode. Season 6 is drawing from Gabaldon’s A Breath of Snow and Ashes book that focuses on Claire and her beloved Jamie’s (Heughan) attempts to settle in peace and thrive in colonial America – not an easy task, on highlands or in North Carolina.

Production on a seventh season of Outlander is to start soon, Starz has said, with that cycle of the Matthew B. Roberts showrun series to have a 16-episode run and a likely late 2022/early 2023 premiere