Continue to Deadline SKIP AD
You will be redirected back to your article in seconds
Skip to main content
January 20, 2021 2:11pm 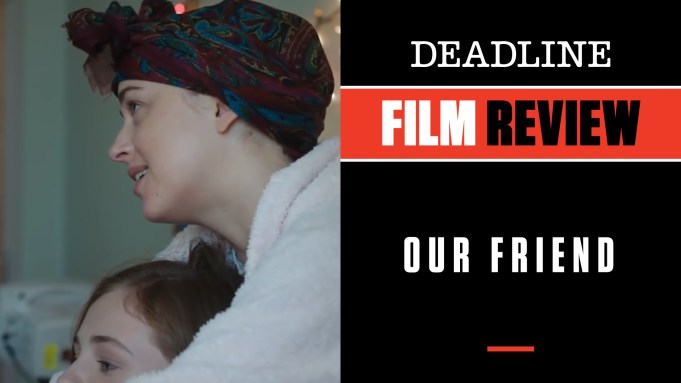 When Our Friend premiered at the 2019 Toronto Film Festival, it was simply called The Friend, but the slightly altered new title feels better for this touching true story based on Matthew Teague’s sensational award-winning Esquire magazine article. It was written about his family crisis when his wife, Nicole, was diagnosed with terminal cancer and died at just 34. The exquisitely written article itself pulled no punches, offering a very real and sometimes wrenching description of what happens when death enters a family dynamic.

Make no illusions that this is a Love Story sort of tale, but it is one full of heart and centered on someone not in the immediate family. That would be Dane, their best friend who selflessly puts his own life on hold in New Orleans and travels to the Teague home in Fairhope, AL, to help out the hopelessly lost friend who is about to lose his wife and mother of their two young girls. “Help” isn’t the right word as Dane goes way beyond that and stays well beyond anyone had the right to expect.

While the movie — which stars Casey Affleck as Matt Teague, Dakota Johnson as Nicole and Jason Segel as Dane — doesn’t get down to the horrid details of what Nicole’s slow death entailed, it is an unflinchingly honest and touching account of the value of a friend who would not let go, even at the worst moments. Teague’s National Magazine Award-winning piece was titled “The Friend: Love Is Not a Big Enough Word,” and that about sums up why, in writing about his wife’s death sentence, he turned the real focus on Dane. It is a moving and human true story on the meaning of genuine friendship in the moment it matters most, a movie where you will yourself laughing and crying but ultimately rewarded in the reassurance that we are not alone, even in the toughest and most demanding of times. It is a message that has taken on a great deal more resonance when viewed through the prism of the coronavirus pandemic that has ravaged this divided country and world. Our Friend arrives as proof of our uniquely shared humanity at a time it may be needed most — an intention Teague probably never had when he decided to share his most personal moments in such a public way.

Director Gabriela Cowperthwaite and screenwriter Brad Ingelsby expertly navigate some tricky territory in shaping the story in cinematic terms and ways that allow it to move us without ever resorting to false sentimentality or the tropes of a Hallmark movie. Although not going into graphic detail, the film never stints from the decline in Nicole’s emotional and physical state but still manages to keep it bearable to watch in a movie that offers hope and humor where you would least expect it. That is thanks to the non-linear structure the filmmakers employ, darting back and forth in time to present a portrait of this couple and their special friend through the years. It all is separated by graphics labeling the timespan: 12 years before diagnosis or one year after diagnosis and variations therein. We see how they came together, and different points in their lives that paint the whole picture and make the impending loss that much more personal for the audience as well.

The stuff of life is injected into each of their shared and separate story beats, eventually merging into a cohesive whole. It’s effective and affecting, and Cowperthwaite benefits from a superb cast, with fine performances not only from the three leads –though you hope that someday Affleck gets a nice comedy after all the angst his recent film work has put him through onscreen — but also the supporting cast including Isabella Kai and Violet McGraw, as daughters Molly and Evie, and especially the magnificent Cherry Jones, who turns up as a caregiver at the moment of truth near the end. This is a must-see.

Producers are Kevin Walsh, Teddy Schwarzman, Michael A. Pruss, and Ryan Stowell. Check out my video review with scenes from the film at the link above. Gravitas Ventures and Universal Pictures Home Entertainment release the film on Friday in theatres and On Demand.

Do you plan to see Our Friend? Let us know what you think.