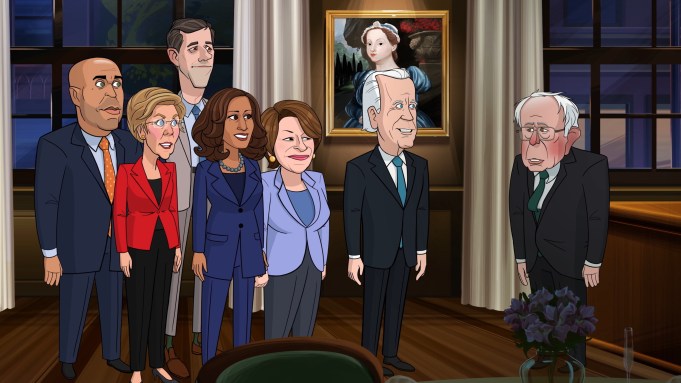 The creators of Our Cartoon President must have been drawing as they watched the last two nights of Democratic presidential primary debates. The cold open for this Sunday’s episode, released today, even includes a busing joke.

Pretty much note-perfect, with no one spared, the cold open skewers the vast line-up of presidential hopefuls as well as the NBC/MSNBC hosts (ouch, on behalf of Chuck Todd).

Lester Holt kicks things off by proclaiming himself “the last living good man,” then taking a brutal swing at Todd before beseeching the audience to “hold your ‘Is this the best we can dos?’ until the end.”

From there the debaters from both nights get grilled – except for the ones deemed unworthy, which must hurt even more. Elizabeth Warren can’t stop shaking, Kamala Harris threatens to “bus” Joe Biden to a forest and leave him there, Beto O’Rourke isn’t quite sure why a bunch of people encouraged him to run, Amy Klobuchar goes full-on demonic (“I once made an intern swallow a battery”), and Marianne Williamson wants to be “the first quack president” of the United States (“My cat’s in the car and refuses to unlock the door”).

Joe Biden makes what is likely the most accurate promise of the night (if he’s elected, he says, “no pile of sh*t will go unstepped in”), before revealing his true political plan.

The cold open, written, recorded, and animated in less than 12 hours following the final debate, begins this Sunday’s episode of Our Cartoon President, in which the title character decides to buck his party and reverse climate change to solve his sweating problem. Meanwhile, a disheveled Cartoon Bernie Sanders asks Cartoon Mitt Romney to transform him into a polished candidate.

The debate cold open airs on this Sunday’s episode of Our Cartoon President, June 30, 8PM ET/PT on Showtime. Check it out above.