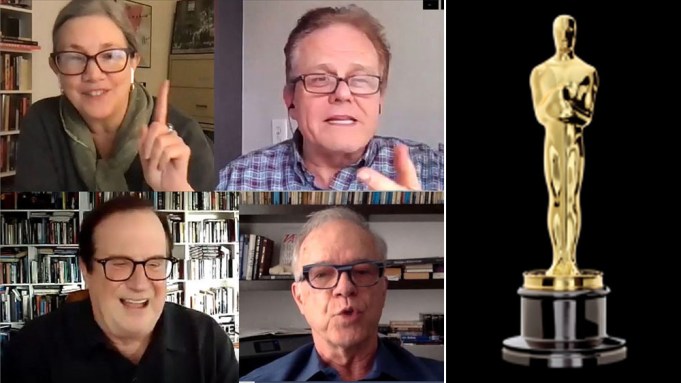 PMC has assembled an internecine gathering of the top prognosticators from its key brands to dish on the status of the Oscar race, argue what’s in front at this point and discuss what might be lagging behind in a year like no other.

Tom O’Neil, the awards maven behind Gold Derby, is joined by Tim Gray — Variety’s longtime top Oscar expert with proven track record of success — IndieWire’s reliable awards race veteran Anne Thompson and yours truly here at Deadline to call the shots on the contest as we see it right now, just a couple of weeks away from the Golden Globes, followed days later by the Critics Choice Awards and exactly one month from the Oscar nominations on Monday, March 15.

Covid, of course, threw a big wrench into the normal workings of the season, essentially extending it from six long months to eight looooong months, with the Oscars themselves taking place on their latest date ever, April 25. Last week AMPAS announced that broadcast will be like no other Oscar show in history, coming live from the Dolby in Hollywood, as well as several other locations.

Oscars Will Air Live From “Multiple Locations” Including The Dolby, Academy Says

The actual look of the show remains a big mystery, but we are beginning to see a number of the movies in contention start to build consensus toward those much coveted nominations. Tom, Tim, Anne and I discuss what it all means, gauge the front-runners including Nomadland, Minari, Mank, Promising Young Woman, Ma Rainey’s Black Bottom, The Trial of the Chicago 7 and more to assess just where Oscar voters hearts might be leaning and if they are going to be on the same page as regional critics groups who have weighed in with their favorites.

As we all know, Oscar sometimes follows his own unique path, and momentum is everything. Are there dark horses out there jockeying for position? Do Sound of Metal, Da 5 Bloods, Judas and the Black Messiah and One Night in Miami have the stuff to pull off a coup coming down the stretch? Or is there a late-breaking contender opening this month that will surprise us all? Eligibility has been extended for 14 months, through February 28, for this year only due to the fact that so many films originally set for release in 2020 were moved off the calendar due to Covid. Still this has become a season full of quality, and that includes a killer acting race, in particular a lethal one for Best Actress. Check out our Oscar smackdown by clicking the link at the top of this post.