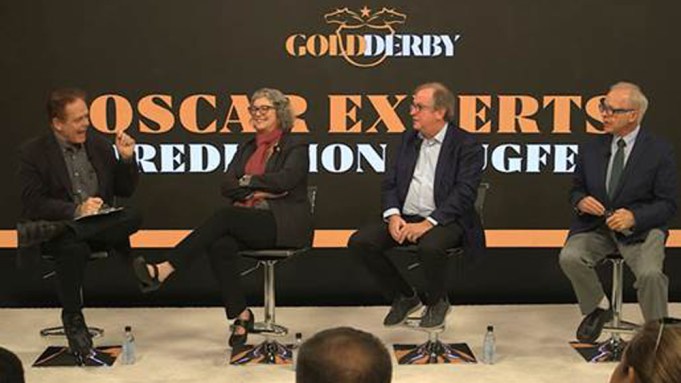 Earlier this week we duked it out over which movies stand the best chance at this point of nabbing Best Picture Oscar nominations.  Now Part 2 of our session finds Deadline’s Pete Hammond,  Indiewire’s Anne Thompson, Variety’s Tim Gray, and our moderator and host Gold Derby’s Tom O’Neil giving the 411 on who is out in front in all four of the Oscar acting races.

In front of a live audience comprised of awards strategists, publicists and executives, we dish on the most likely actors to be very happy on the morning of January 13, when Oscar nominations are announced. Of course, we taped this before any of the major precursor shows and groups had weighed in, so watch us all go way out on a limb this early in the game. And yes, it is a game, but we love to play it.

All of us hone in on the fact that the male actors are in an impossible position this year in both lead actor and supporting actor races, the latter being full of lead actors trying to squeeze in the support category even though they might have equal or higher billing. This is a common practice of late so two stars in the same movie don’t have to compete with each other (i.e., Leo and Brad, Jonathan and Anthony, Tom and Matthew, Robert and Al).

Will the Actors Branch accept the idea that these major stars are in the correct categories for which they are being campaigned ? Time will tell. As for the women, is this Renee Zellweger’s Best Actress Oscar to lose or did she peak too soon? Will a possible Golden Globe win lift Jennifer Lopez to victory in support over hometown favorite Laura Dern? There are so many questions posed, and so many possibilities to ponder. Play along with us as we go at it in PMC’s brand new studio.

Click on the video above to watch all the fireworks.