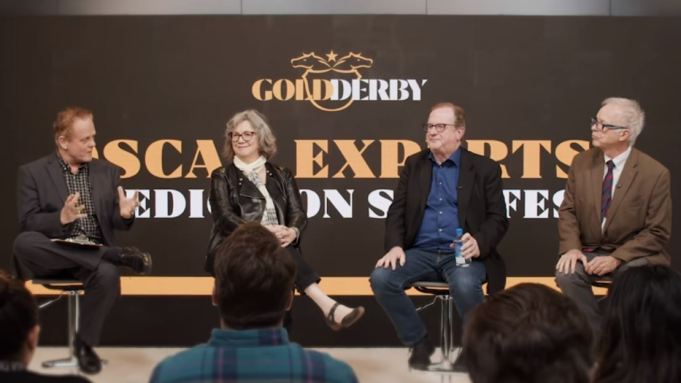 And now the voting for the 92nd annual Oscars begins. Today, ballots go live online for all eligible members of the Academy, and that numbers roughly 8,733 at last official count. The overall membership rolls of AMPAS now number 9,794, but not all are allowed to weigh in on just who should win in all 24 categories.

This is a short season, with the Oscar ceremony falling on February 9, two weeks earlier than normal, and I have talked to many members who are angry now that they realize they have no time to see everything they should, or would like to, and that could mean ballots will come in even later than usual with a good number of voters waiting until the last minute to vote. It is easy to do that since it is all online now — no more paper ballots. The absolute deadline is 5 PM PT on Tuesday, February 4.

To help out in this regard and perhaps point Oscar voters to movies they still haven’t seen, experts at four PMC-branded companies gathered again at our new PMC studio to tape a final predictions smackdown and assess the race as we head to the wire. With results from SAG, PGA, DGA and various other guilds, Golden Globes, Critics’ Choice and numerous critics groups now all in the mix, all we await of the precursor shows are this weekend’s BAFTA and WGA soirees to give us  further indication of the way the winds are blowing.

With wins at the Globes, DGA and PGA, Universal and DreamWorks’ 1917 has past Oscar history on its side, but  AMPAS’ unpredictable method of tabulating Best Picture — where everyone must rank their choices in order from best to least favorite — can really produce some surprises when the final envelope is opened, and for the past several years we have had more splits between Directing and Best Picture than at any point in the Academy Awards’ 92-year history. That can make it suspenseful and we analyze and argue over all the possibilities.

Today we cover the waterfront on the Best Picture race, and how that might affect Screenplay and Directing categories. Gold Derby’s Tom O’Neil, Variety‘s Tim Gray, IndieWire’s Anne Thompson and myself all give it their best guesses. Come back Friday when we will get into a brawl over the Actor races (are they really locked up? – some say no) and other categories to help you win (or lose) your office pool.