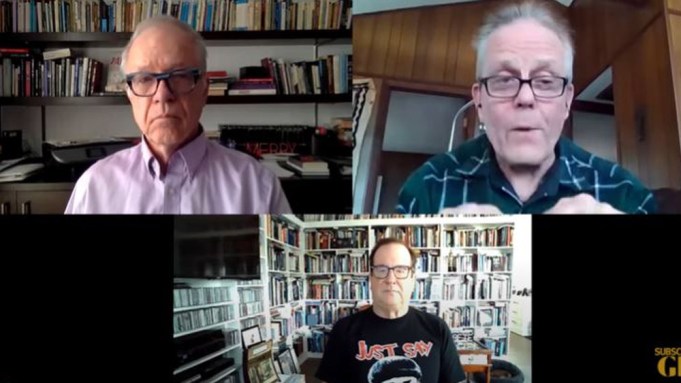 With just over two weeks to go before the big night, we are at it again trying to make sense of this very fluid Oscar season and this (in some ways) very  unpredictable race. Gold Derby’s Tom O’Neil, Variety’s soothsayer Tim Gray and Deadline’s Pete Hammond enter into their latest smackdown and assess the odds of who is in and who might be out.

As both the all-important DGA and BAFTA ceremonies take place — virtually — this weekend, with both expected possibly to add to Nomadland’s impressive haul at precursor shows in this unusual pandemic-affected eight-month season, there is reason to hope by some that it still might not be the ballgame. Oscar ballots don’t go live for another week or so (April 15-20), so not a single vote in that regard has been cast. And last weekend’s important SAG victory for The Trial of the Chicago 7 as Outstanding Cast (a 50%-of-time Oscar bellwether) gives Netflix some prayer of a come-from-behind victory and first Best Picture win for their timelier than ever movie from Aaron Sorkin via Steven Spielberg’s initial idea some 14 years ago.

Also, though, the male acting contests look locked up for the late Chadwick Boseman and Judas and the Black Messiah’s Daniel Kaluuya due to routs at the Globes, Critics Choice and SAG among other wins, the Lead and Supporting Actress races are anything but predictable. In fact, you could offer a winning scenario for every one of the nominees in both of those categories, and we do. We also parse the Best Picture race to its most minute detail, as well as International Film, Documentary Feature, Director, Screenplay and more. To watch just click on the link above.