Continue to Deadline SKIP AD
You will be redirected back to your article in seconds
Skip to main content
December 3, 2019 10:47am
1Comments 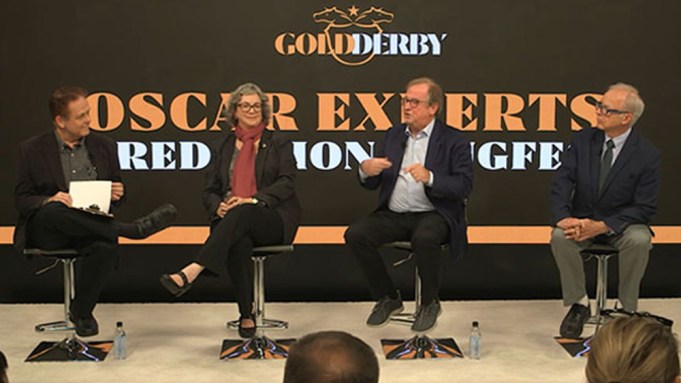 In front of an invited audience of awards publicists, strategists and other executives on Monday, four brands under the Penske Media label sent their top Oscar prognosticators to dish and dissect this year’s Best Picture Oscar race. Gathering at PMC’s brand-new studio in Los Angeles, Gold Derby’s Tom O’Neil moderated and was joined by Deadline’s Pete Hammond, Indiewire’s Anne Thompson and Variety’s Tim Gray. Click on the link above to watch.

Taking on every possibility from this year’s most buzzed-about contenders, the group got into a sometimes heated debate over who’s currently on top and which movies will still be standing when the Academy of Motion Picture Arts and Sciences announces its Oscar nominees on Monday, January 13.

Can a foreign-language film finally prevail and actually win Best Picture? We analyze the chances of Parasite doing just that. Will Netflix break the barrier and win Best Picture with The Irishman, The Two Popes or Marriage Story? We give the positives and negatives on that prospect. What about the surging Ford v Ferrari or early leader Once Upon a Time in Hollywood? Can a latecomer like Sam Mendes’ World War I epic 1917 take it all? Or how about the timely Bombshell? Can Joker have the last laugh?

It goes on and on as we dismiss the spin and take the temperature of the race just as the first awards are starting to be announced this week. Later this week we will be taking on the four acting categories too.