How The Pieces Fit In CAA's Acquisition Of ICM Partners
Read the full story
January 10, 2020 1:20pm 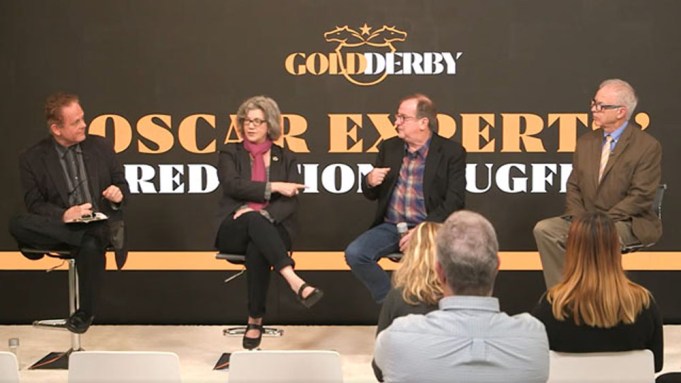 Today it is time for part 2 of our PMC internecine slugfest as experts from Deadline, IndieWire, Variety and Gold Derby gather in the new PMC studio to spitball predictions in the four acting races ahead of the Academy of Motion Picture Arts and Sciences announcing nominations on Monday morning.

Following Thursday’s Best Picture predictions, the panel reconvenes and again includes moderator Tom O’Neil of Gold Derby, Anne Thompson of IndieWire, Tim Gray of Variety and Pete Hammond of Deadline. We survey the uber-competitive Best Actor field and agree some very worthy performances are going to be inevitably left out as we also ask the question whether Golden Globe winner Joaquin Phoenix is the certain frontrunner at this point over the likes of Antonio Banderas, Leonardo DiCaprio and Adam Driver who seem to all have good shots to be among the final five.

Can Robert De Niro recover from Globe, SAG, and BAFTA snubs to make it? Will the Taron Egerton resurgence continue? Where are Eddie Murphy, Christian Bale and Jonathan Pryce?

In Best Actress, the biggest question being asked here is if Renee Zellweger is a shoo-in or will a higher-profile film push the likes of Scarlett Johansson or Charlize Theron over the top? We also assess the supporting races, where Brad Pitt and Laura Dern appear to have cemented their frontrunner status. It is a lively discussion indeed.