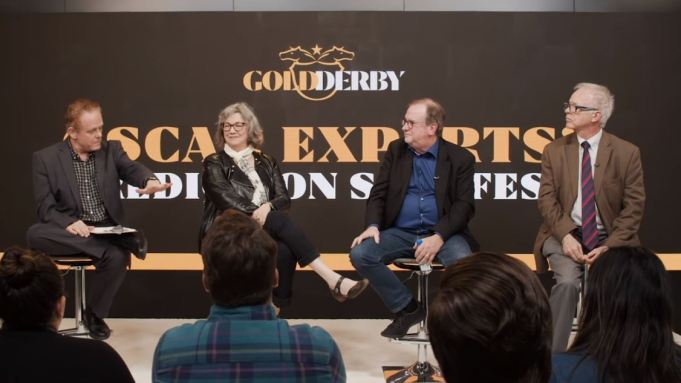 After giving our best spitball regarding the Oscar Best Picture, Directing and Screenplay races, in Part 2 of our internecine PMC smackdown we take on all the acting categories and offer opinions on several others down the ballot that will be crucial if you want to win your Oscar pool.

I was joined by prognosticators Anne Thompson of IndieWire, Tim Gray of Variety and Tom O’Neil of Gold Derby who hosted the panel that had a few surprises from my point of view, especially regarding the acting contests.

With the same four — Joaquin Phoenix, Renee Zellweger, Brad Pitt and Laura Dern — winning consistently at top precursor shows like the Golden Globes, SAG, and Critics’ Choice, it would seem career suicide to predict any other outcome at the Oscars. But as we point out at this time last year, there was no one who wasn’t forecasting a Glenn Close Best Actress win — and we all know what happened there (in case you were born under a rock, Olivia Colman won for The Favourite).

As we discuss in our video above, there were extenuating circumstances in that race that don’t really compute for this one, such as the fact that Close’s film The Wife was not nearly as widely seen as Colman’s, which was up for Best Picture and nine other Oscars. However, that doesn’t stop at least two of us from speculating this year on a different outcome than the consensus.

We also mull over several other categories and try to guess who is on top as we move into the last few days of voting.

To watch our final smackdown of the season, click on the video above.

Notes On The Season: Tarantino’s Kodak Moment, Why Sam Mendes Loves ‘Breaking Bad’, And Is It Lucky 11 For Diane Warren?