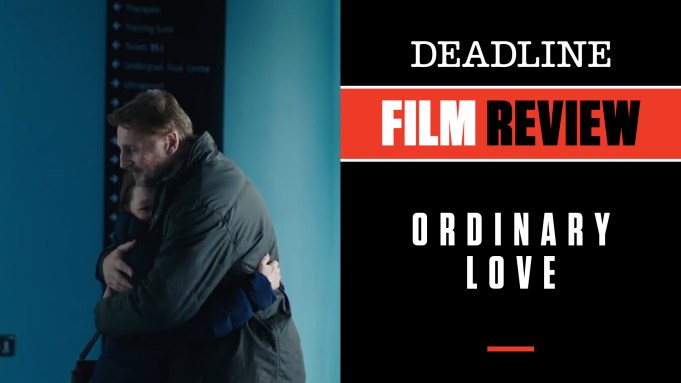 Just in time for Valentine’s Day comes a true love story, one whose strength is tested in the face of a personal crisis. I can think of no more appropriate day for Bleecker Street to release Ordinary Love, a film about an older married couple facing a cancer diagnosis and facing the prospect of death doing them part with a deep love that will persevere no matter what. The plot is deceptively simple, and something many in the audience of mature filmgoers to which this movie is aimed may be facing themselves.

Joan (Lesley Manville) is diagnosed with breast cancer after discovering a lump, thus beginning a year of treatment that challenges both her and her longtime husband Tom (Liam Neeson) as they go about trying to keep alive the life they have lived so intimately together for so along.

It is the everyday stuff that makes this so heart-wrenching to watch, as well as not knowing how it will all end. For many it is a devastating diagnosis, but for Joan and Tom it becomes further proof of a union that has such a solid foundation it seems impossible that anything can tear it apart. Owen McCafferty’s all-knowing and sensitive screenplay doesn’t ever go to maudlin places or cheap sentiment but lets us get to know this pair, their insecurities that rise to the surface, and all of their personality traits, self-doubts and reasons they have never been apart. The movie, inspired by McCafferty’s own experience with his wife, does not wear its heart on its sleeve but simply presents an “ordinary love” as exactly that, but one with extraordinary will to remain intact.

Directors Lisa Barros D’Sa and Glenn Leyburn leave the flashy techniques at home and let it simply play out as touching and perhaps recognizable human drama. This never drifts into melodrama but instead, over the course of this very challenging year, focuses on the little things in life including walks, shopping, sitting in waiting rooms, and all the stuff we take for granted but in this case take on adding meaning. It is an intimate look at this couple, but told in vignettes. At the end, we know exactly who they are and why they matter.

Neeson, in a polar opposite turn from his usual action fare, is quietly affecting as a man not exactly sure how to handle the new cards life has dealt, but it’s Manville who really plays it with such affecting truth that we can’t turn away from watching her at every step in the process. She’s superb. It is basically their movie, but David Wilmot as Peter, a fellow cancer patient with much to say, is also very fine in his scenes.

If it all sounds like it could be a bit of a downer, it really isn’t. I can’t think of a better gift this Valentine’s weekend because if ever there was a film that is about true and enduring love, however ordinary, it is this one. Producers are Brian J. Falconer, David Holmes and Piers Tempest.

Check out my video review above with scenes from the film, which opens Friday. Do you plan to see Ordinary Love? Let us know what you think.