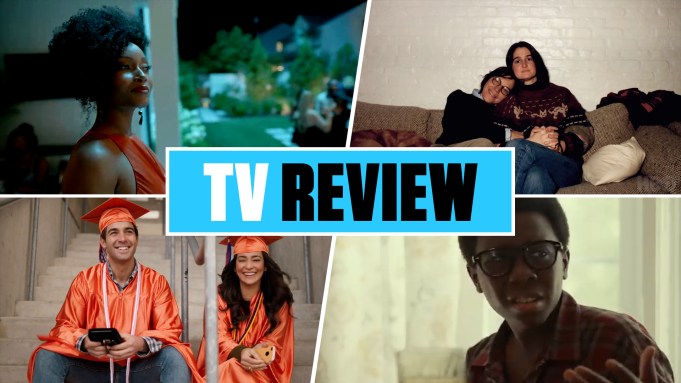 Less than a day after the 73rd Primetime Emmy Awards were handed out, the new fall TV season is upon us. As you can see on the billboards all over Los Angeles, the multimillion-dollar hype machine is in full throttle, though we all know most of the new kids on the block won’t even make it to a sophomore year.

So, with that in mind which one is the show that you have to watch this Premiere Week? Well, for the answer, you’ll have to watch my video review above.

Almost 20 years since the original The Wonder Years went off the air, ABC is reviving the Emmy-winning coming-of-age drama September 22. However, this Saladin K. Patterson-created iteration shifts from the undefined 1960s white middle-class suburbs of the original show to a Black middle-class family in partially desegregated Montgomery, AL.

Starring EJ Williams as 12-year old Dean Williams in the turbulent year of 1968, the new Wonder Years executive produced by Patterson, Lee Daniels, Marc Velez and Fred Savage (who helms the pilot) weaves in real-life events like the murder of MLK and the war in Vietnam with the successes and struggles of the fictional family. Dulé Hill and Saycon Sengbloh co-star as Dean’s parents, with Laura Kariuki and Julian Lerner his siblings. Heels star Allen Maldonado is also in the cast as Dean’s rather intense baseball coach.

Acclaimed filmmaker Ry Russo-Young turns the camera on herself and her family in Nuclear Family. Looking at the battles, legal and otherwise, that her lesbian mothers had to wage to raise Ry and her sister Cade in the late 1980s, the September 26-premiering three-part HBO docuseries takes a hard look at what America once expected a family could be and the more textured nation we are today – and how it wasn’t easy to get here.

In another offshoot of his big overall deal with 20th Television, Lee Daniels is returning to Fox’s primetime schedule Tuesday with Our Kind of People.

Created by Star and Mixed-ish alum Karin Gist, the Yaya DaCosta-led series based on Lawrence Otis Graham’s 1999 book Our Kind of People: Inside America’s Black Upper Class takes a soapy look at the lives of Martha’s Vineyard’s tonied African American set as the Chicago Med vet’s Angela Vaughn wedges her way into the elite to seek revenge for ills done to her maid mother.

Co-starring The Resident’s Morris Chestnut and Scandal papa Joe Morton, Our Kind of People is a co-production of 20th Television and Fox Entertainment. The show is executive produced by Gist and Claire Brown via The Gist of It Productions; Daniels and Marc Velez via Lee Daniels Entertainment; Pam Williams; Ben Silverman, Howard T. Owens and Rodney Ferrell via Propagate; and Montrel McKay.

Picked up to series in March by NBC, Ordinary Joe makes its debut tonight on the Comcast-owned network right after The Voice’s Season 21 premiere.

Coming from House veterans Russel Friend and Garrett Lerner and The Batman writer-director Matt Reeves and his 6th & Idaho banner, the Jimmy Wolk-starrer tracks three different routes the life of Joe Kimbreau and what would have happened based on choices made in pivotal moments of his life. Broadly speaking, that means Joe is a hugely successful singer-songwriter, an overworked ER doctor and parent in a struggling marriage, and a NYPD cop following the family tradition. Natalie Martinez, Charlie Barnett and Elizabeth Lail co-star.

A co-production of 20th Television, Universal Television, a division of Universal Studio Group, 6th & Idaho and 3 Arts, Ordinary Joe is based on a decade-old script by Reeves. Friend and Lerner will EP with Reeves, plus Adam Kassan and Rafi Crohn, and Howard Klein for 3 Arts. Adam Davidson will direct and executive produce the pilot airing tonight.

Can you guess which one is the show you have to watch? Watch my video review above to find out right now.