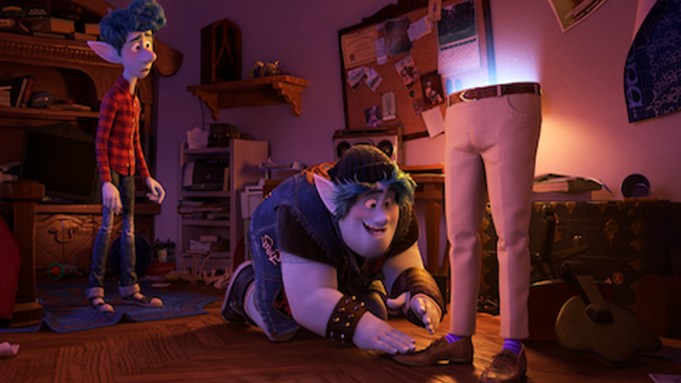 Disney’s animated movies often feature a missing parent, but the next Pixar toon kinda flips the script. Dad is gone in Onward, but it seems there’s a way to bring him back, if only for a day. Watch the new trailer above.

Tom Holland and Chris Pratt star as Ian and Barley Lightfoot, teenage brothers in a suburban fantasy world. On Ian’s 16th birthday, their mom (Julia Louis-Dreyfus) gives him a gift from the boys’ late father, who the family believes was an “accountant.” But the present is a wizard staff — turns out Pops was a wizard, and the staff comes with a spell that could bring him back for a day. One problem: The revival goes awry, and the family is left with Dad from the waist down only.

There a Weekend at Bernie’s vibe to the half-a-dad as the brothers race to bring the rest of him back. And they only have 24 hours. During their quest, they encounter snarling unicorns, enough cops to staff a Blues Brothers remake and a gang of tiny biker-fairies who go from trashing a convenience store to giving chase. Octavia Spencer co-stars.

OInward reunites director Dan Scanlon and producer Kori Rae — the team behind Pixar’s 2013 smash Monsters University. Scanlon said at Disney’s D23 last month said the plot is inspired by the story of his childhood and how his father died when he was young and he always wanted to find out about him.

Disney releases the toon March 5. Have a look at the trailer above — set to the 50-year-old raucous riffs of “Hocus Pocus” by Focus — and new key art below, and tell us what you think.