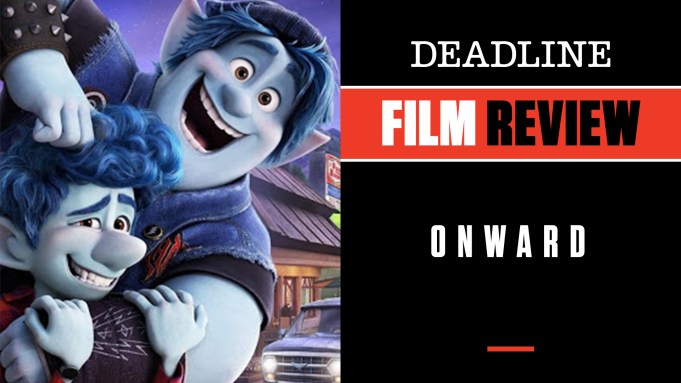 It is hard to believe that Pixar has hit the quarter-century mark, but it has been exactly 25 years since Toy Story took animated features in a new and most welcome direction. Since then, with just under one new movie a year, it has been in the enviable position of frequently topping itself. (Not always, but much of the time, as even the fourth edition of the Toy Story franchise proved at this year’s Oscars.) However, sometimes sky-high expectations is not exactly what you want, and Pixar’s new film Onward would be better off if audiences didn’t have such brilliant predecessors with which to compare it. That said, this movie, a kind of Elvish fantasy yet set firmly in Spielbergian suburbia, is fun taken strictly on its own terms. For any other company it would be a high-water mark.

Set in the quaint town of New Mushroomton, the story centers on brothers, both elves — Ian Lightfoot (voice of Tom Holland) and his metalhead big ‘bro Barley (Chris Pratt). They live with their mother Laurel (Julia Louis-Dreyfus) and stepfather Colt (Mel Rodriguez), who is a Centaur working as a local cop. Their father died of cancer before Ian could ever know him, but upon Ian’s 16th birthday he gets as a gift a long-held present left by dad. It is a wooder staff that a wizard might use, complete with a phoenix gem that supposed makes it work with the right command. A letter says that by using this one day they would be able to bring back their father for just 24 hours and the chance for Ian to meet him and get some wisdom.

Barley’s comical attempts to bring the magic — and Dad — to life fail, but Ian has the right touch, sorta. Dad appears, but only in a half-baked way because they blew the rest of the recipe, thus their visit with him is only halfway successful as he appears only from the waist down. What to do? They disguise the upper half and drag him along on a road trip in order to get another phoenix gem that can bring Dad fully to life.  Lots of action and funny encounters ensue as the brothers race against time in order to make an impossible dream come true.

There is a certain wistfulness and sweetness to all of this, a combination of many cinematic influences but definitely Spielberg’s ET era, and Lord of the Rings. This is a world, as the opening narration explains, full of elves, wizards, dragons and lots of mystical happenings, but under Dan Scanlon’s (Monster University) direction (he also wrote it with Jason Headley and Keith Bunin) there’s also a bit of Ferris Bueller and lots of contemporary references kids will enjoy. The voice work of Holland and Pratt is excellent, as are other characters, especially Octavia Spencer’s  Manticore. As you might expect, the animation is first rate, as is the score from another pair of brothers, Mychael and Jeff Danna. No, it’s not Toy Story, or Up or Finding Dory, but it still is a cut above and a good time at the movies when we can really use it.

Producers are Pete Docter and Kori Rae. Disney releases it Friday. Check out my video review above with scenes from the film.

Do you plan to see Onward? Let us know what you think.