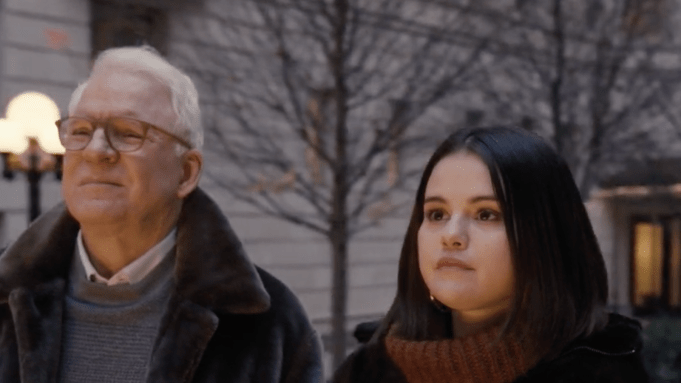 Hulu today unveiled the first teaser for Only Murders in the Building Season 2, which offers a brief look at the characters played by new cast members Cara Delevingne and Amy Schumer.

“We’ve been warned not to speak out,” says Martin Short’s struggling Broadway director Oliver Putnam at a press conference-type gathering—presumably regarding the shocking death of Arconia Board President Bunny Folger (Jayne Houdyshell) at the tail end of Season 1.

“But we here at Only Murders in the Building, we will not be going quietly,” adds Selena Gomez’s Mabel Mora.

Only Murders in the Building‘s first season watched as Savage, Putnam and Mora—three neighbors at New York apartment building, the Arconia—came to bond over their obsession with true crime. Following a suspicious death in their building, they decided to start their own podcast about their investigation of the death, which the police ruled a suicide.

In Season 2, they race to unmask Folger’s killer, though three (unfortunate) complications ensue—the trio is publicly implicated in Bunny’s homicide, they are now the subjects of a competing podcast, and they have to deal with a bunch of New York neighbors who all think they committed murder. While Delevingne will play Alice, a sophisticated art world insider who becomes enmeshed in the mystery of Folger’s death, details with regard to the character Schumer is playing have not been disclosed. This season, Michael Rapaport will recur, with Shirley MacLaine joining Schumer as a guest star.

Only Murders in the Building debuted on Hulu last August and returns for its second season on June 28. The series hails from co-creators and writers Martin and John Hoffman (Grace & Frankie, Looking), who executive produce along with Short, Gomez, This Is Us creator Dan Fogelman and Jess Rosenthal.

Check out the Only Murders teaser dropped on Oscars day above.