Next 'Homeland'? Gordon & Gansa Set 'Dinner At The Center Of The Earth' Pilot With Showtime And Sony TV
Read the full story
April 28, 2019 9:00am 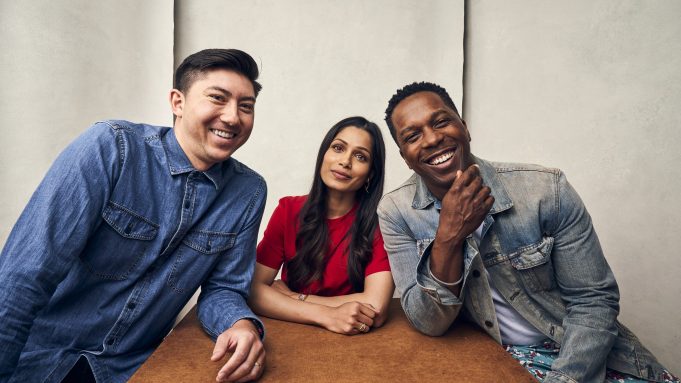 In the Tribeca pic, Will (Leslie Odom Jr.) and Eva (Freida Pinto) are a couple in love, whose lives are violently disrupted when a virus is suddenly released, which begins to kill all the women on the planet. Hiding out in self-imposed quarantine, the pair are forced to dodge savages coming after Eva, at a time when those women left alive are commodities to be hunted down.

For Doscher, the inspiration for the pic was a road trip he took with his “then-girlfriend, now wife”—a six-week journey during which “she would sometimes be the only person that I saw, let alone the only female.”

“Whenever we would encounter people, I found myself becoming a little bit more protective than I normally am,” the director shared, sitting down at Deadline’s Tribeca Studio with his stars. “She’s a strong, independent woman and certainly does not need my protection, but I thought that was an interesting emotional place to start a movie.”

Drawn first and foremost to stories about relationships, Pinto saw in Only a chance to break out of a creative box in which she had been placed. “I have done my fair share of love stories, but I don’t think I was given this much to do in a relationship in a film, where I was completely owning myself, and refused to be someone’s sidekick. I first started off with Slumdog [Millionaire], [and] it was great, and then everyone thought I was going to play the sunshine girl in every film,” the actress shared. “It was time for me to own a female character.”

A Tony Award-winner who originated the role of Aaron Burr in Broadway smash Hamilton, Odom Jr. also seized upon Only, as an opportunity to broaden his horizons. A lover of genre films, the thesp was fairly new to the medium of film, even with extensive television experience under his belt. “I think [Only] was one of the very first projects I did after leaving Hamilton,” he said, “and I just was excited to learn how to tell stories in a new way.”

For more from our conversation with the director and stars behind the sci-fi drama, click above.