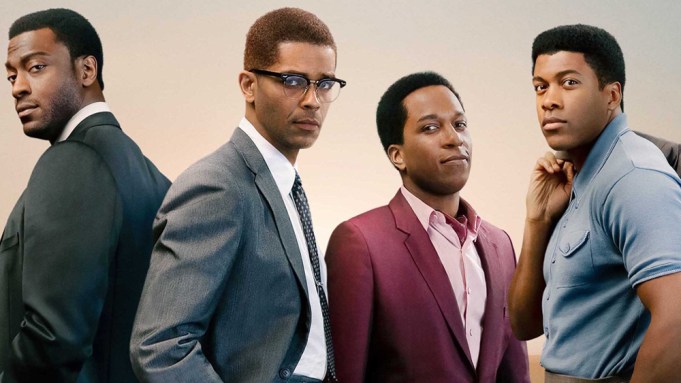 “You brothers — you could move mountains without lifting a finger,” Malcolm X tells Cassius Clay, Sam Cooke and Jim Brown in the new teaser for Regina King’s One Night in Miami (watch it above). The minister adds later, “This movement that we are in is called a struggle — because we are fighting for our lives.”

The film, which debuted at the Venice Film Festival in September, is set on the night of February 25, 1964. It follows a young Cassius Clay as he emerges from the Miami Beach Convention Center as boxing’s new heavyweight world champion, having just shocked the world by knocking out the undefeated Sonny Liston. While crowds of people swarm Miami Beach’s hotspots to celebrate the bout, Clay — unable to stay on the island because of Jim Crow-era segregation laws — spends the night at the Hampton House Motel in Miami’s Overtown neighborhood celebrating with three of his friends: activist Malcolm X, singer Cooke and football star Brown. The next morning, the men emerge determined to define a new world.

Helmed by Oscar and Emmy winner King, One Night in Miami stars Kingsley Ben-Adir as X, Eli Goree as Clay — the future Muhammad Ali — Aldis Hodge as Brown and Leslie Odom Jr. as Cooke. It is based on the debut play by Kemp Powers, who also adapted it for the screen.  The supporting cast includes Beau Bridges, Jeremy Pope, Michael Imperioli and Nicolette Robinson.

Amazon Studios acquired global rights to One Night in Miami in July ahead of the fall festivals. The pic finished second for the People’s Choice Awards at Toronto’s behind Chloe Zhao’s Frances McDormand starrer Nomadland. It’s set to hit select theaters on Christmas Day and begin streaming January 15 on Amazon Prime. Watch the teaser above and check out the key art below.