'This Is Us': How NBC Drama Wrapped The Pearsons' Story After Six Seasons; Dan Fogelman Breaks Down Series Finale; Stars React To End
Read the full story
March 8, 2021 5:29pm 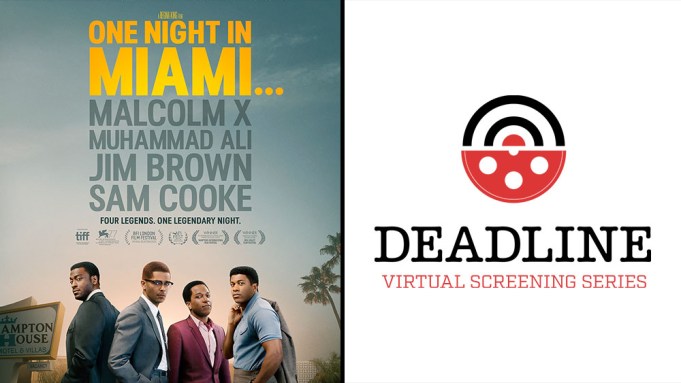 “I mean, Jim Brown always been Jim Brown,” laughs One Night In Miami star Aldis Hodge of the NFL legend he portrays in the Regina King-directed film. “The fact that he is still with us adds a different degree of pressure for me because I know that he is going to see it,” Hodge added. “And any time you do a biopic, you hope to honor the person who you are actually depicting,”

As you can see in the video above, the City on a Hill actor joined One Night In Miami co-stars Eli Goree and Leslie Odom Jr recently on the Deadline Virtual Screening Series. The Riverdale alum plays Cassius Clay and the Grammy- and Tony-winning Hamilton vet brings the late great Sam Cooke to life in the Critics’ Choice Award-winning film adapted by Kemp Powers from his play of the same name.

Depicting an often-overlooked real sit-down among the legends, plus Malcolm X (played by Kingsley Ben-Adir), in February 1964, the acclaimed ONIM speaks to a 2021 America still confronting many of the same travesties of injustice and hate.

Unlike the others, Hodge stepped into the persona of an icon very much still alive today, which brought expectation for him as well as Jim Brown.

“I was hoping to any measure that he would enjoy it and we’ve heard multiple times now from multiple sources, most recently from Regina herself, who talked to Mr. Brown, she said that he gives his stamp of approval, he thought we all did a wonderful job,” Hodge said during the panel following last week’s screening of Oscar winner King’s feature directorial debut. “That to me that’s the highest compliment we can get, cause he was there.”

In terms of being there as an actor, Goree pulled back the curtain on his process of becoming the boxing champion who would become Muhammed Ali soon after the quartet’s Florida get-together.

Although the Halifax-born actor had never actually played Clay/Ali before, he had been getting ready to figuratively and literally step into the ring as the GOAT almost since the very first time his acute resemblance to the fighter was pointed out to him.

“So, as far as the character, I’d never felt more prepared for any character in my life,” Goree said. “As far as the process of telling this story, it was an adjustment because I was the least experienced actor on the cast and much less experienced of an actor than the director,” he noted. “I almost look at it as when you see a college player go to the pros. Even if they are a really really good prospect when they come into college, it’s just a different pace.”

“The easiest part really was the dialogue, because it’s so well constructed, it’s so well written,” said Odom of his own process and pace in the film.

“It’s a weird paradox that happens as an actor,” says Odom of his work and becoming ONIM’s Cooke specifically. “There’s so much hard work up top, while they research and all that stuff, preparing, but then when you really release into the material, it’s really quite simple.”

With that, click on the video above to see more of our One Night In Miami panel.