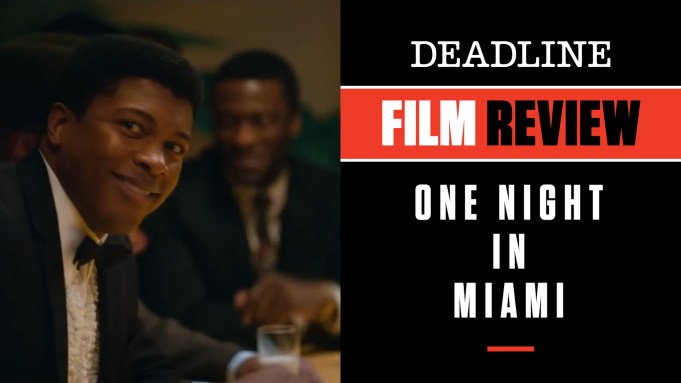 Regina King has four Emmys in recent years for her acting as well as a Best Supporting Actress Oscar on her mantel, and now in her debut behind the camera for Amazon’s entertaining and important new film One Night in Miami, deservedly she is earning more acclaim, but this time behind the camera.

It isn’t easy for any director, no matter how seasoned, to take a stage-bound play and make it cinematic, but that is exactly what King has done here. Her film version of Kemp Powers’ 2013 One Night In Miami (Powers also wrote the screen adaptation) speculates about what happened behind closed doors during a February 1964 meeting at the Hampton House in Miami that brought together Malcolm X, the then-named boxer Cassius Clay, singer Sam Cooke and football star/actor Jim Brown. The occasion was the night Clay shocked the world by knocking out Sonny Liston to become Heavyweight Champion of the World. After the fight, the four icons got together in a remarkable moment in the nation’s history as America was in the midst of the Civil Rights Movement, and these four men somehow would meet at the intersection of that momentous time.

The movie, like the play, is pure speculation in terms of what was actually said in that hotel room, but Powers has based his ideas on a lot of research and informed imagination. A simple fact is that, the next day, Clay would announce his joining the Nation of Islam and officially changing his name to Muhammad Ali. Malcolm X, on the other hand, began to distance himself from the Nation of Islam at the same time. Brown, a football superstar, was an important advocate for Civil Rights but also was juggling newfound fame in otherwise white-driven movies like that year’s western Rio Conchos, which is part of the conversation that Powers gives him in this meeting.

Brown is the quartet’s sole survivor — Malcolm X was assassinated the next year, Cooke was shot dead in motel parking lot later in ’64, and Ali died in 2016 at age 74 — but he was not consulted for the play or film, so this is all a fictional account of a real-life happening. Cooke, after trying to appeal to white audiences in his early career — a telling scene shows him bombing in front of an all-white night club crowd singing none other than Debbie Reynolds’ signature tune “Tammy” — would go on to make waves with an anthem for the Civil Rights era, “A Change Is Gonna Come,” used effectively here by King.

The conversation is fascinating, covering many aspects of this quartet’s beliefs and doubts, responsibilities and questions and their place in society and potentially urgent impact beyond who each one of them is individually. Of course, none of it would work without actors up to the task, and this is without question a brilliant ensemble. As Malcolm X, the titular force behind the meeting and the conversation, British actor Kingsley Ben-Adir makes the role his own despite many of us having long memories of Denzel Washington’s towering work in Spike Lee’s three-hour 1992 biopic. Ben-Adir, however, brings a more relaxed and even personal view due to the circumstances of this particular and narrow focus.

Eli Goree delivers more than just a good impression of Clay, he gets to his essence here — a young fighter at the moment of triumph and life-changing decisions. Aldis Hodge, so great in last year’s films Brian Banks and Clemency, scores again with a convincing Brown that even the man himself must be impressed with if he’s seen the film. Hamilton Tony Award winner Leslie Odom Jr. is so good as Cooke that someone should cast him in a stand-alone biopic of the great musical star who was taken from us much too early. Odom is so convincing as Cooke I thought he must be lip-syncing to the man himself, but indeed it is all Odom. Remarkable.

Interestingly, though, none of the tragedy that was to come not long after this fateful night is addressed at the end credits. King instead lets this unique gathering stand on its own and speak for itself without telling us in what the future would bring. I thought that was a strong decision that others might not have made. One Night in Miami is exactly that, this “one night,” though King does open it up to include the Liston fight itself, Malcolm X’s domestic life, Cooke’s and Brown’s careers, etc. There also is nice, if brief, supporting work from Beau Bridges, Lance Reddick, Michael Imperioli (as Angelo Dundee), Jasmine Cephas-Jones and Joaquina Kalukango, among others. The film clearly belong the four fine actors, though, each taking on important figures of the 20th century and making them real in ways we have never seen before.

Producers are Jess Wu Calder, Keith Calder, and Jody Klein. Amazon will open this in Miami (of course) on Christmas Day followed by limited release on January 8 and then streaming on January 15. Check out my video movie review with scenes from the film at the link above.

Do you plan to see One Night in Miami? Let us know what you think.