Continue to Deadline SKIP AD
You will be redirected back to your article in seconds
Skip to main content
January 28, 2021 6:00pm 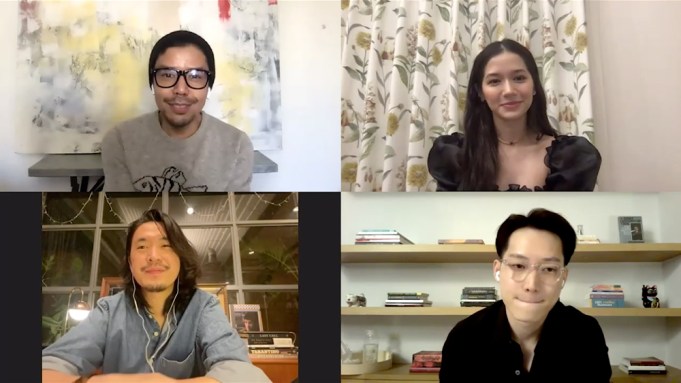 In Baz Poonpiriya’s One For The Road, we are introduced to Boss (Tor Thanapob) who is living the good life as a bar owner in New York and he has a way with the ladies…kind of. When he learns that his estranged friend from Thailand Aood (Ice Natara) is sick. Because of this Aood has made a list of things that he wants to do before he dies and has asked Boss to come help him check all the items off on that list.

Boss returns home and joins Aood on this journey as they drive from north of Thailand to the south, looking to bring closure with people from his past. Along the way, they begin to bring life back to their estranged friendship. The mood changes when Aood gives Boss a final gift that threatens to tear their relationship apart again.

Poonpiriya was joined by Natara and actress Violette Wautier in Deadline’s Sundance Studio to talk about the film — particularly how the story hits close to home for him.

The Best Genius filmmaker learned that one of his close friends in New York had cancer and he became the inspiration for the character of Aood. Poonpiriya wanted to finish the movie in time for him to see it, but unfortunately, he didn’t make it. Even though the movie was inspired by his friend, the film’s premise was different at first — largely in part to producer and icon Wong Kar Wai.

Poonpiriya said, “We started with something different from this storyline and along the way [Wong Kar Wai] turned to me and said, ‘You know what, I don’t think you believe this story and I think you should do something that’s personal.. something that you totally believe in.” And thus, the new premise for One For The Road was born.

For Natara, he found a connection with Aood because he worked in a restaurant before he became an actor. “To me, it wasn’t hard to understand him,” said Natara. And the fact that it was a personal story for Poonpiriya, Natara feels like he connected to him as well.

He added, “The story can relate to everyone.”

“I wouldn’t say it was easy to connect [to the character],” Wautier admitted. “I did a lot of homework and talked to Baz a lot and asked his opinion.”

The film speaks to the time as many are experiencing loss and also reevaluating their relationships. Even so, Poonpiriya said, “There’s hope in the film…we are lucky enough to be alive and we have to do the best we can.”

One For The Road will make its World Premiere at 8pm MT/7pm PT on Sundance’s virtual platform. The title is in the World Cinema Dramatic Competition.