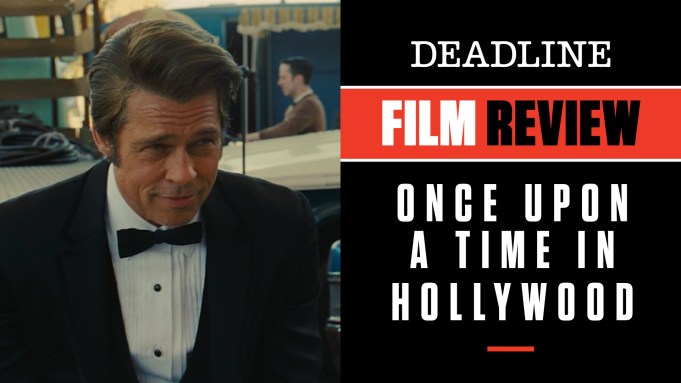 Set in 1969 at the intersection of a changing film industry and social upheaval, Quentin Tarantino’s ninth film is the one it seems that is closest to its director, and it also happens to be his best.

Ultimately, Once Upon a Time in Hollywood is about friendship and loyalty, a film full of bittersweet truths with a certain wistfulness that is really Tarantino’s love letter to the Los Angeles he remembers as a 6 year old. From arguably the most influential director of his generation (if you look at how many films have been dubbed “Tarantinoesque” in recent years), this is one from the heart and, without going into great detail, might not be at all what you expect. But the less you know, the better.

Sure, there is the head-banging violence that has been a QT trademark in his very R-rated filmography, but I can’t say that the use of it in this movie is anything less than completely satisfying. That might sound like an odd thing to say in a movie that has the horrific Manson murders that happened in August 1969 as something very much in the mix of a brilliant screenplay that manages to merge real and fictional characters and events effortlessly into a complicated web that ought to surprise and thrill audiences. At its core, though, is the story of a friendship and loyal partnership between fading actor Rick Dalton (Leonardo DiCaprio) and his stuntman and now driver and fix-it man Cliff Booth (Brad Pitt).

Dalton is a guy who had a hit Western TV series in the late ’50s and early ’60s who then tried basically unsuccessfully to transfer that popularity into a major movie career a la Clint Eastwood or Steve McQueen (played here with uncanny wryness by Damian Lewis). As we zero in on a February week in 1969, Dalton is a staple as a bad guy in a lot of different TV shows of the day. No stranger to the bottle, and starting to forget lines because of it, we see him attempt to make his way through a guest role as the villain in an episode of a real show, Lancer. DiCaprio drew big applause from the Hollywood premiere crowd Monday night after a gut-wrenching scene in which he struggled to get his acting mojo back. It is simply bravura work the audience filled with many actors could certainly identify with.

Tarantino switches back and forth between this storyline and Booth’s, a guy whispered to have killed his wife and gotten away with it, to whom Dalton is extremely loyal and keeping in his employ. We watch as Booth drives him around L.A. to the ever-familiar radio station KHJ (as least to anyone who grew up in this town like I did), and then on his own, where he stumbles onto a hippie commune — where the Manson followers are now encamped on George Spahn’s ranch. Spahn is played in brief but superb fashion by Bruce Dern, cast in the role after original hire Burt Reynolds died.

The third storyline involves Sharon Tate (Margot Robbie), who with Roman Polanski rents the mansion next door to Rick’s house on Cielo Drive. We follow Tate around in joyful fashion, especially to the Bruin Theatre in Westwood, where she watches with great satisfaction as the audience at a matinee clearly enjoys her performance in the Dean Martin movie The Wrecking Crew. She also hangs out with her friends including Jay Sebring (Emile Hirsch). It is a lovely performance from Robbie and a much sweeter view of Tate and her talents than the media association we have with her brutal murder when she was eight months pregnant. The story then continues six months later.

There is no question that Tarantino knows how to cast a movie. Like so many of his films, this one is loaded with fine actors in smaller parts including Al Pacino as an agent interested in helping Rick revive his career, Mike Moh very amusing as Bruce Lee, the late Luke Perry as a TV series actor, Dakota Fanning and Austin Butler as standouts in the Manson gang, Kurt Russell and Zoe Bell as a husband and wife at odds on the set of their show (Russell also narrates), and particularly scene-stealer Julia Butters as the 8-year-old co-star in the TV episode with Rick. Even more of a scene stealer is Cliff’s dog Brandy, who plays a crucial role and nails it.

Pitt and DiCaprio are both Oscar worthy, a Newman and Redford for a new age who act in roles taking place in the same year that Butch Cassidy and the Sundance Kid was taking over movie screens. Neither star has been better. Let’s hope this isn’t their last teaming.

Among the stars off screen are production designer Barbara Ling and set decorator Nancy Haigh, whose meticulous re-creation of a long-lost L.A. of 50 years ago is a wonder to behold; Oscar winner Robert Richardson’s stunning cinematography; and the ’60s designs of costume maven Arianne Phillips. Tarantino’s choice of eclectic musical cues and songs of the era is spot-on once again.

Producers are Tarantino, Shannon McIntosh and David Heyman. Sony releases the Columbia Pictures film Friday. Check out my video review featuring scenes from the movie at the link above.

Do you plan to see Once Upon a Time in Hollywood? Let us know what you think.