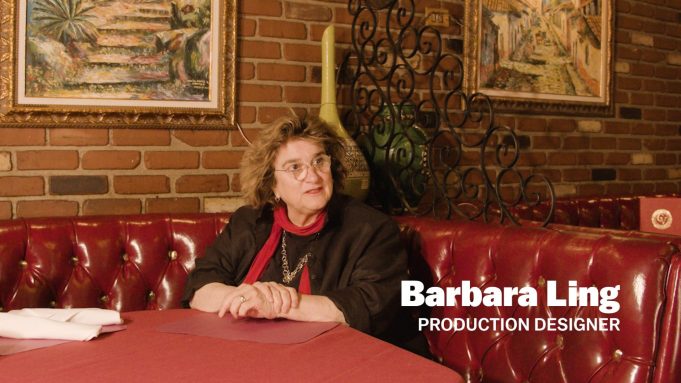 In her first collaboration with Quentin Tarantino on Once Upon a Time in Hollywood, production designer Barbara Ling got to re-create or visit several iconic Los Angeles locations—including some of Tarantino’s personal favorite restaurants.

Set in late 1960s L.A., the ninth feature from Tarantino starring Brad Pitt, Leonardo DiCaprio and Margot Robbie centers on a television actor at a low point in his career, and his friendship with his loyal stunt double,  as the pair struggle to navigate an industry they scarcely recognize at the tail end of Hollywood’s Golden Age.

Speaking about Once Upon a Time as his memory piece, à la Alfonso Cuarón’s Roma,Tarantino incorporated iconic L.A. eateries including Casa Vega, El Coyote and Musso & Frank Grill into his script, asking his designer to dress each venue for 1969.

While Ling was able to pull some period props for these locations—including vintage tableware from Musso & Frank—dressing each of these locations still proved a challenge. “A lot of the problem you have obviously in films is being able to clear art, and in some of the restaurants, they didn’t know who the artist was, or there was no way to find the artist to clear the art. So, we had to switch [art] out,” Ling says, sitting down in the booth at Casa Vega where Rick Dalton (DiCaprio) and Cliff Booth (Pitt) shared drinks, in a scene shot sometime between June and November of last year. “But we also had so much research on this that we looked at what that was on the walls at that time.”

The latest guest of Deadline’s Production Value video series, Ling explains that when it came to Casa Vega, the artwork on the walls was only the beginning of her problems. “The other thing that was unusual in this restaurant is that the tables have been here for so long, and they were originally sunk into the ground in concrete. So, you can take the tabletop off, but you can’t get rid of the stem. We had to really work on that,” the production designer says. “Luckily, because this is one of Quentin’s favorite restaurants and has been all of his life, they know him well here. I mean, this is his family—same with El Coyote.”

Coming to Once Upon a Time in Hollywood, Ling had already done ’60s L.A. once before, for Oliver Stone’s 1991 film The Doors—a film that Tarantino knew of and admired. Even back in 1991, Ling found it challenging to take L.A. back in time, and of course, dealing with the city as it is now was even harder. The production was particularly challenging given that it required so much location shooting, with Tarantino refusing to employ digital set extensions—instead, electing to redesign tourist-filled and traffic-jammed areas of the city from top to bottom.

Back in 1991, at least “the [Sunset] Strip was still the Strip,” Ling explains. “But now, really the Whisky [a Go Go]’s there, and then everything on both sides of the Whisky was completely modernized.”

“What’s amazing is how fast things were being torn down. Right before we shot, as we scouted, the location guy, Rick [Schuler], would say to me, ‘I’m so sorry, but that’s going to be demoed in two weeks,’ ” the production designer recalls.  “L.A. never has been a preservation city, but it’s surprising how quickly, in the last two years, it has transformed itself.”

A teenager living in L.A. in 1969, Ling did find that her and Tarantino’s shared experience of the city, as it was then, was key in communicating with the director. “We both knew the city,” she says, “the visuals of what we could find now, and visuals of what we should be trying to grab memories [of].”

Working as a production designer since the 1980s, with such films as Batman Forever and Fried Green Tomatoes on her résumé, Ling finds little not to love about the work that she does, as challenging as it may be at times. “How could you not love the idea of, every new thing you do is a completely new set of rules and inventions? [As a designer], your head never stops,” she says. “In this case, the uniqueness of this will be very hard to beat afterwards.”

For more from our conversation, click on the video above.